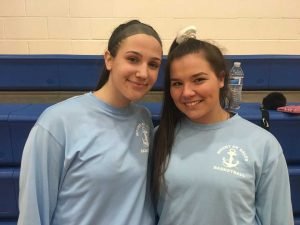 Mount de Sales, with Abby Kuhn (left) and Maura Devine, posted another Top 10 victory Wednesday. The No. 10 Sailors, who defeated then-No. 9 Western at the Holly & Hoops Tournament at Notre Dame Prep last week, opened the 2019 slate with a victory over No. 7 John Carroll School in a IAAM non-league match in Catonsville.

In a Top 10 girls basketball showdown, No. 10 Mount de Sales Academy, of the IAAM B Conference, flashed some muscle, Wednesday, opening 2019 with a 61-46 rout of No. 7 John Carroll School, an IAAM A stalwart, in Catonsville.

The Sailors did extreme damage from behind the three-point arc, connecting for 10 three-pointers in the victory.

Kristen Zaranski scored a team-high 22 points and snared eight rebounds for the Sailors (11-3 overall), while Abby Kuhn delivered a double-double with 17 points and 13 rebounds. The Sailors grabbed a 15-9 lead after one quarter and were never headed.

Sailor point guard Maura Devine had a strong fourth period to close the game out for the home team with seven of her nine points coming in that final period. Devine also dished six assists and had no turnovers while running the Sailors potent (61 ppg, 8.1 3pfg/game) offense.

The Patriots (5-5) were led by George Mason University recruit Jordan Wakefield, who scored a game-high 27 points.

Friday, the Sailors travel to Annapolis to play St. Mary’s in a B Conference game while the Patriots travel to No. 2 Roland Park Country School for an A Conference match.