No. 10 Dulaney opens with a big win over St. Paul’s

No. 10 Dulaney did not know what to expect from visiting St. Paul’s as the Lions opened their 2019-2020 season on Thursday afternoon. The Crusaders had knocked off No. 5 McDonogh in their previous game. 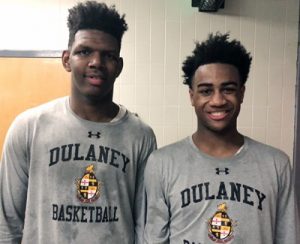 The Lions always know what to expect, however, from stars Cam Byers and Ryan Conway as the pair combined for 38 points in a 73-45 season-opening win in the Lions’ Den.

Two key cogs from last year’s 4A state semifinal squad, Ike Cornish and Che Evans, had transferred out of state, leaving Dulaney’s fortunes firmly in the hands of Byers, a powerful wing presence who is in his second year at Dulaney after winning an MIAA A Conference title with John Carroll, scored a game-high 23 points, while Conway, a junior and one of the best combo guards in the state, added 15

Byers and Cole McGeen also led the way on the boards, grabbing 10 rebounds each, and Conway had eight boards.

On Thursday, Dulaney went on a 12-2 run to close the first quarter with an 18-8 lead. St. Paul’s (2-2), which played without its injured 6-9 center Luke Trotta and was hampered by early foul trouble, did rally within 22-20 in the second quarter, but Dulaney took command with another big run, 17-5, and led by 14 at the half.