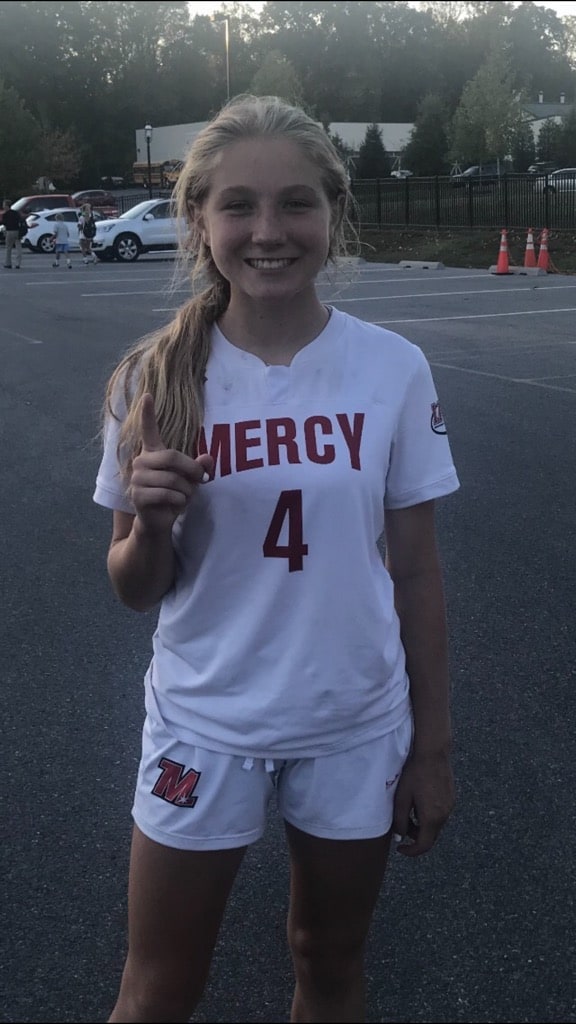 Payton Schenning was the hero for Mercy soccer Thursday. The freshman midfielder scored the game’s only goal in the first half as the fourth-ranked Magic upset area and nation No. 1 McDonogh in an IAAM A Conference contest in Owings Mills.

by Derek Toney and Gary Adornato

Mercy High’s soccer team has been soaring up the local rankings this season, as the Magic climbed to No. 4 this week in the VSN Girls Soccer Top 20, but the team scaled an even higher mountain, Thursday, upsetting top-ranked McDonogh School, which also happens to be ranked No. 1 in the nation by Top Drawer Soccer and USA Today.

Freshman Payton Schenning scored the only goal of the contest in the 1-0 IAAM A Conference victory, on McDonogh’s home pitch in Owings Mills.

“We knew what we were facing going in,” said Schenning. “We knew we had to come out hard and not feel pressure.”

McDonogh came in with a 6-0 record and the Eagles were coming off a 4-1 rout of New Jersey power Pennington Prep, on Sunday. It was McDonogh’s first regular season loss in IAAM A play since a 2-0 loss to Archbishop Spalding in 2017.

The Eagles, 16-0-2 in league matches since the 2017 loss to Spalding, have won the last two A Conference titles and five of the last six, including a win over Mercy in the 2017 championship game.

The Magic got all it needed with 4 minutes, 20 seconds left in the first half as Schenning volleyed home Claire Geier’s ball.

“I think we did pretty well finishing the ball out the air,” said Schenning. “We showed that we should’ve won the game.”

Mercy is now 7-1 overall this season and both teams are now 2-1 in conference play. Spalding, which handed Mercy its only loss of the season (3-2 last week), is also nationally ranked at No. 16.