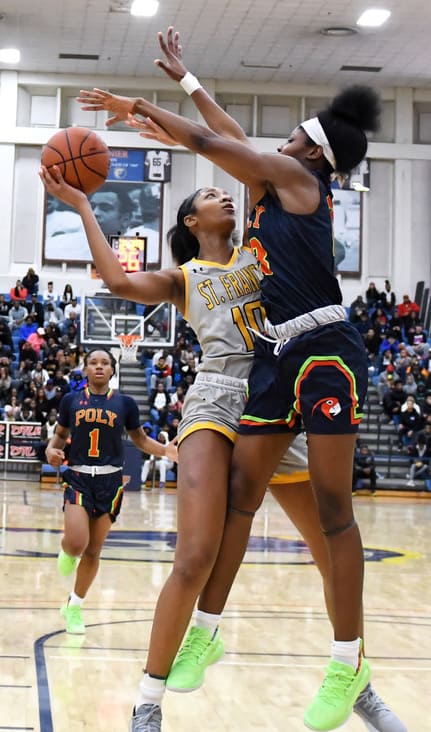 Poly High junior Tenea Robinson suffered a concussion during last year’s girls basketball game against St. Frances Academy and spent most of the time watching that loss from the bench.

The 5-foot-9 guard just wanted to be part of Saturday’s girls basketball rematch — and what a part she was.

Robinson scored 21 points, including the basket that gave the No. 2 Engineers the lead for good in overtime as they upset the top-ranked Panthers, 70-63, before about 3,000 fans at Morgan State University’s Hill Field House.

“Last year, I really couldn’t play because I got hurt in the game,” Robinson said, “so when I came out, I wanted to be a part of this team, not like the team but of the win, of course, so I had to bring my determination, my hunger…”

Poly teammate Dasia Townes said Robinson didn’t do anything differently than she usually does.

In the clash of the top team in the IAAM and top team in Baltimore City, the four-time defending A Conference champion Panthers couldn’t keep Robinson off the free throw line and she made them pay. She hit 13 of 15, including eight in the second quarter when she scored all but three of the Engineers’ 13 points.

For two-time defending city champion Poly (16-1 overall), the victory over St. Frances certainly ranks as one of the biggest wins — if not the biggest win — in program history.

Kendall Peace-Able, who played at Poly and has coached the Engineers for the past 17 seasons, said, “I guess it is (the biggest win). Yeah, I guess I am the history of the program, pretty much. Except for the win in 96 against Western. I was on that team.”

St. Frances (17-2), which beat Poly 61-55 last year, hadn’t lost to an area public school since falling to Aberdeen in a Christmas tournament in December 2014. The Panthers, ranked No. 6 in this week’s MaxPreps’ national Top 25 poll, were riding a 15-game winning streak after an early loss to Prince George’s County’s Riverdale Baptist School, the only team to beat Poly this season.

The Panthers led 39-28 early in the third quarter, but they struggled in overtime without their best two ball handlers on the floor. Junior point guard Aniya Gourdine and Maryland-bound wing Angel Reese both fouled out in the fourth quarter. They combined for 40 points, 24 rebounds and seven assists.

St. Frances coach Jerome Shelton said the young players left on the floor in overtime were overwhelmed without either of their two leaders.

“We’ve been in this situation before and we’ve responded in a positive manner,” Shelton said, “so our behavior in this game was very uncharacteristic of what we’ve seen in the first 18 games. Poly was prepared today. They pressed us into some poor decision making and we didn’t respond well.”

Reese, a McDonald’s All-American who scored 26 points and had 17 rebounds, committed her fifth foul reaching over Da’Brya Clark after Clark came down with a defensive rebound. Clark hit both free throws for a 62-60 Poly lead with 21 seconds to go before Anani Humphrey’s layup with 10 seconds left forced overtime.

Humphrey hit a free throw to open overtime, but the Panthers would not score again. Robinson’s short jumper with 2:50 left put Poly on top to stay, 64-63. St. Frances, with no veteran ball handlers, couldn’t handle Poly’s pressure and turned the ball over four times.

Peace-Able said the pressure and the Engineers’ zone defense was a key not just to winning overtime but to keeping them in the game from the start.

“When you run the kind of zone defense that I ran, it kind of makes them cut the shot clock kind of deep the entire game,” Peace-Able said. “I’ve watched a lot of people kind of just play [the Panthers] in a half court, and playing them in a half court gives them an opportunity to think and pass the ball around and allow Reese to float and pop out. It allows her all kinds of freedom to do what she’s great at, but we just tried to do some things where we weren’t allowing those things …”

While Robinson stood out, the Engineers had big games from all of their starters, including point guard Cache’ Wilson whose layup for a 67-63 lead all but sealed the victory with 45 seconds left in overtime. She and Robinson added the final points on free throws.

Wilson finished with 10 points while Townes added 16. Clark, a freshman guard, came off the bench to also score 16, including 12 in the fourth quarter.

“It’s all about staying together and remaining disciplined,” said Wilson. “This is a milestone, because we have a lot of season left.”

The Engineers, who have won 14 straight games, have about a month left before playoffs. Peace-Able said the win over St. Frances will give the Engineers added confidence as they go after the first state title in program history. They’ve been to the state tournament nine times since 2007 and reached the title game four times, including last March.

“I have faith in my team all the way,” she said. 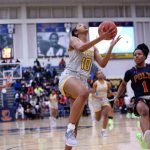 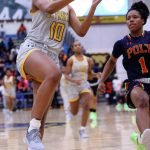 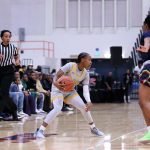 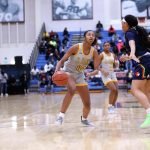 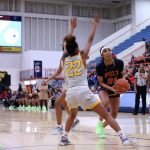 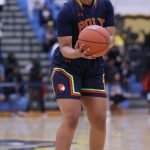 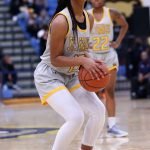 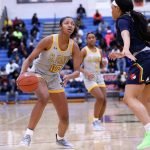 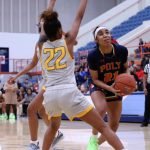 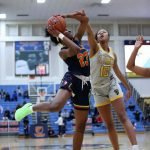 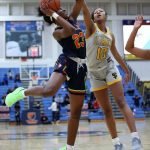 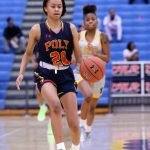 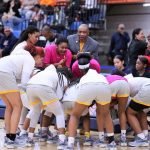 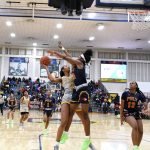 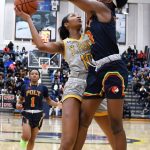 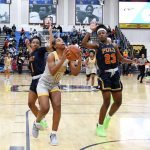 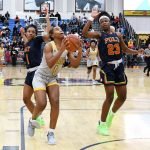 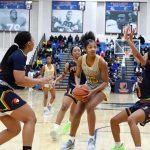