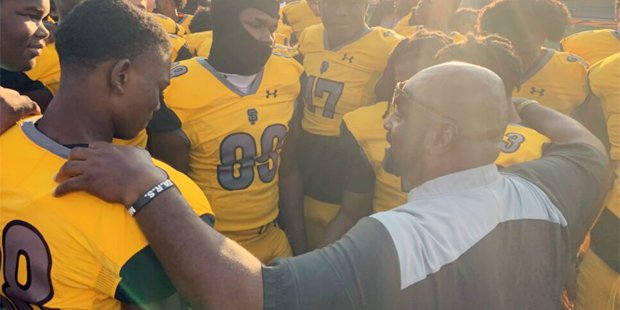 Panthers avenge a rare loss inside the DMV

St. Frances, ranked No. 1 in Baltimore by VSN and in the state media poll, played a in-state opponent, Friday, for a second consecutive week, a rarity since the Panthers began playing a national schedule three years ago, and the Panthers were ready.
Coming off a win over Franklin at Morgan State University last weekend, St. Frances matched up with Our Lady of Good Counsel in Olney, and avenged a loss to the Falcons from last spring, the only contest the Panthers played in the abbreviated spring slate, with a 50-7 rout.
St. Frances (2-1) started fast, scoring on its first possession with a 45-yard pass from John Griffin to Sean Hall. Hall then setup the Panthers second score, a 3-yard run by Dejuan Williams, with a long run into Good Counsel territory.
Williams made it 21-0 before the first quarter expired with a 38-yard touchdown run and the Panthers carried a 28-7 lead into halftime.
In the third quarter, St. Frances scored a defensive touchdown as they recovered a fumble in the end zone and yet another TD run for Hall uped the lead to 42-7, turning on the running clock.
St. Frances has a bye next week as it prepares to travel to California for an Oct. 1 matchup with De La Salle (CA), a perennial national championship contender.