No. 1 St. Frances breaks away from Spalding in the middle quarters 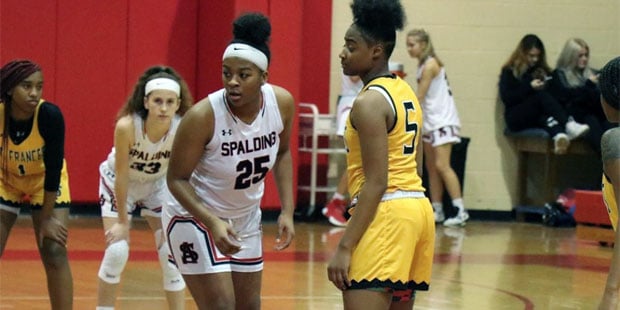 Four Panthers score in double-figures to secure IAAM A victory

Host Archbishop Spalding hung tough with top-ranked St. Frances for one quarter of Monday’s IAAM A Conference basketball battle in Severna Park, but the mighty Panthers broke the contest open in the middle quarters as they claimed a 60-53 win to remain undefeated in league play.

Leading 16-13 after the first period, St. Frances (10-1, 4-0 IAAM A) outscored the Cavaliers 37-19 over the next two quarters to determine the outcome. Spalding fought back to win the final stanza, 21-7, largely against Panther reserves, but it was not enough to close the gap.

Leah Johnson and Koi Sims both had double-doubles to lead Spalding (5-5, 1-2 IAAM A). Johnson had 16 points and 10 rebounds, while Sims scored 13 and grabbed 14 boards. In addition, Terra Dzambo had 11 points and Kamari Sims had nine points and five assists for the Cavaliers.