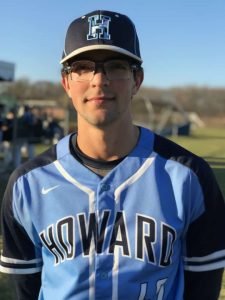 Howard senior pitcher Gabe Delgado went 4 innings, giving up three hits, striking out 3 and walking three for his second win Wednesday. The UMBC recruit helped his cause with a two-run homer as No. 1 Howard held on for a 9-6 win over 8th-ranked Marriotts Ridge in Howard County baseball action in windy Ellicott City.

It wasn’t a masterpiece, but you can thank the weather conditions for that.

On a very blustery day in Ellicott City, No. 1 Howard held off visiting and  8th-ranked Marriotts Ridge, 9-6, in a battle of Howard County powers.  The result was emblematic of the torrid five-team race that has developed in Howard County.

Each baseball that went up in the air became an adventure and several defensive plays were botched as each team committed three errors in a matchup of the 2018 Howard County Pitcher and the 2018 Player of the Year.

Howard’s senior ace Gabe Delgado, the reigning HoCo Pitcher of the Year, notched his second win to best his Mustang rival, Josh Osulfka, the returning Player of the Year with neither his usual outstanding self on the bump. Each had a lackluster performance despite their established talents over the past couple seasons.

“It wasn’t a great day for baseball, ” said Howard’s ninth-year coach Nick Hoffner. “Despite the bright sun, the conditions were not good with 25 to 30 mph wind gusts. We’re playing good right now, but it’s not our best yet. We need to improve a few things and we’re working at it.”

Howard won its first state title (Class 4A) last season after 2A Marriotts Ridge won the county championship despite losing twice (8-4 and 9-4) to the Lions.  Howard last won the Howard County championship in 1979.

Since losing to Mount Hebron, 3-2 last week, Howard has reeled off four straight wins, three in the league.

“It’s one of our goals to win the county championship, definitely,” said Delgado, who is headed to UMBC in the fall. “We just have to play with intensity and take it one game at a time. We put the loss to Mount Hebron behind us and moved forward.”

Delgado was not as sharp as he usually is throwing 80 pitches in the four innings he worked giving up two runs, three hits, striking out three and walking three.

“I fell behind on too many hitters and I’m lucky I didn’t give up more than the two runs,” said Delgado, who gave the Lions the lead in the bottom of the second with a two-run dinger just inside the rightfield foul pole.

Marriotts Ridge answered in the top of the third tying the game at two on an error and fielder’s choice RBI by Tyler Vandenberge. Howard’s junior shortstop Alex Campbell, who batted .351 and played second base on last year’s state champion, made a nifty backhand stab of Vandenberge’s ground shot and posted a trio of 6-3 outs in a row to close the inning.

Campbell, who also chipped in a pair base hits, would record five assists in the game to anchor the Lions infield. The Lions shortstop said the game “moved at a quick pace, was fantastic.”

How true as Howard then erupted for five runs in the bottom half of the third to take what appeared to be a commanding 7-2 lead and chase Osulfka after 67 pitches, four runs charged, five hits, four strikeouts and three walks. Jared Murray’s infield hit produced one of the runs while Aidan O’Connor knocked in a pair and the Mustangs got caught on an intentional forced rundown with runners on first and third for another.

“We practice those first and third situations all the time,” said Mustang coach Paul Eckert whose Stangs would be embarrassed again by the play in the sixth inning resulting in another gift of a run. “We just didn’t execute and that was disappointing.”

Vandenberge replaced Osulfka in the third and went the rest of the way giving up single runs in the fifth on Murray’s second single and the old first-and-third play in the sixth. They proved to be huge runs when the Mustangs rung up four of their own in the sixth.

Chris Horn had replaced Delgado in the fifth and had a 1-2-3 inning, but got in trouble in the sixth giving way to sophomore lefty Ben Fader. Fader got the last two outs after Horn gave up a two-run knock to pinch-hitter to Aleksel Guzman. Guzman strode to the plate with one red and one blue shoe with the sacks full and drilled a shot to center that scored a pair and the bases were cleared on a relay miscue.

Suddenly, it was 8-6 Howard, but as mentioned the Lions added an insurance run. Fader survived the final frame by striking out a pinch-hitter with the bases loaded to end it.

“I was very pleased with the way we came back, ” said Eckert. “We’re a good team, but that was not evident today.”