No. 1 Howard closing in on first County baseball crown 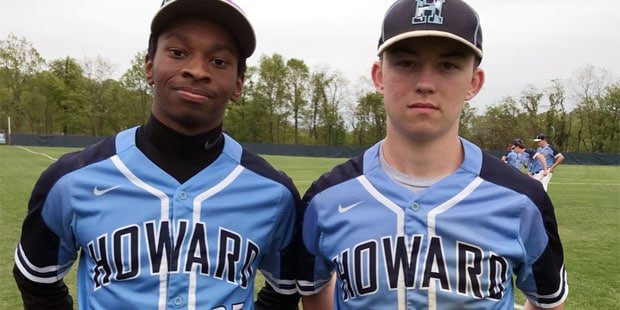 Howard junior shortstop Alex Campbell said that Mount Hebron baseball players “had been talking a little smack about us on social media,” since the Vikings upset VSN’s top-ranked ranked Lions, 3-2, back in late March. It has been the only loss suffered by the 16-1 defending Class 4A State Champion Lions this spring and that’s what made yesterday’s 10-3 victory over the Vikings so special.

Not only did the No. 1 Lions avenge their only defeat, but Howard moved closer to the Howard County League Championship that has eluded them since 1979 – that’s 40 years believe it or not.

In 2018, the Lions won their first state baseball championship in the 43-year history of the Maryland tournament, now with a 12-1 county league record with three games left they are on the verge of amHoward crown. Howard is at Centennial (7-6 league) on Tuesday, at Hammond (1-10) on Wednesday and hosts Wilde Lake (2-9) on Friday.

“We’ve talked about it (not winning the county) and we like to say take it one step at a time,” said Campbell, the Lions’ leadoff man. “We’re just trying to focus on every game and get ready for the playoffs.”

After Monday’s victory over Mount Hebron, the Lions lead by a game in the loss column over the Vikings – 12-1 to 10-2.

“It’s awesome, it feels great to come back out here and give them what they deserve,” said Campbell who delivered a two-run knock in a five-run fifth inning that propelled the Lions over the Vikings.

Through four innings, Mount Hebron’s stylish junior lefty Magnus Dunn had stymied the home team, taking a 2-1 lead into the bottom of the fifth. Dunn had two-hit the Lions while striking out nine, walking three and hitting a batter up to that point.

Dunn, however, plucked Jerry O’Neill and Brian Jakubek to start the bottom of the fifth to open the door for the Lions.

The lefty got a fly out before senior center-fielder Jerrras Murray ripped a sharp single to left to tie the game at two.

“I knew we were down 2-1 so, I was just thinking to drive in the run and tie the ball game, make a big play,” said Murray. “It was probably my biggest hit of the year especially against one of the really good teams.

“Ever since that Mount Hebron loss, it was like a wake-up call to us. We’ve been playing really, really hard and it’s paying off.”

An error and a bases loaded walk sent two more Lions home and Campbell followed with his base hit for two to cap the five-run rally.

Dunn’s teammates had staked him a 2-0 lead in the first inning on a fielder’s choice RBI and another on a sacrifice fly Tommy Fitzpatrick against Lions’ ace Gabe Delgado. Howard got one back in the second stanza on an infield hit by Campbell.

Facing four left-handed hitters in the first five batters in the Vikings’ lineup, Delgado, a senior right-hander, could not get in a groove until the second inning. A preseason MSABC All-State selection, Delgado settled down and held the Vikings scoreless through the next four innings before being removed by coach Nick Hoffner in the top of the sixth inning, after hitting the 100-pitch mark.

Delgado took a 6-2 lead into the sixth and after notching his eighth “K” and yielding only his fourth hit of the game, Hoffner came out and took the ball. Brian Jakubek, who caught the first four innings, replaced Delgado and was greeted by Fitzpatrick who singled in his second run before getting out of the inning with a 6-3 lead.

The Lions put the game away in the bottom of the sixth scoring four more runs off two relievers with two outs. A pair of extra-base hits highlighted the decisive frame as Will Simmons tripled to left and scored on sophomore Ben Fader’s single to center.

Walks to Delgado and Aidan O’Connor loaded the bases and second-baseman/catcher Shayan Kassiri, the No. 9 hitter in the lineup, cleared the sacks with a two-bagger to left.

“We did a great job of executing a lot of things and got major contributions from multiple guys,” said coach Hoffner, who pushed all the right buttons in making changes and signaling strategy moves in leading his team to victory. “It was a complete team effort and that’s what I told the kids afterwards.

“We beat a real good high school pitcher (Dunn) over there. He’s a left-hander with a fastball in the mid-80’s and a nice breaking ball. I think they’re going to make a run in the playoffs (3A East where No. 8 Chesapeake-AA is defending region champion).”

Howard is the defending 4A North Region champion.