No. 1 Curley looks the part 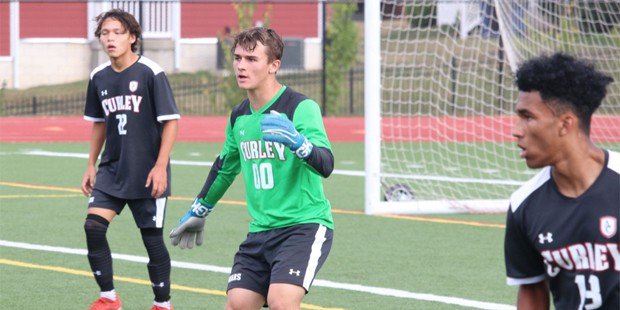 Friars impress on both ends of the field in a 3-0 win over No. 3 McDonogh

Archbishop Curley, which reached the top of the VSN Boys Soccer Top 20 earlier in the day, played like a No. 1 team, Monday afternoon at home against No. 3 McDonogh, getting goals from three different players and playing shutout defense, in an impressive 3-0 decision over the defending champion Eagles in East Baltimore. 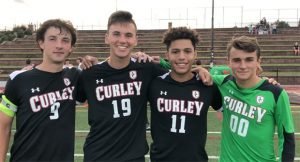 Led by goalkeeper Chris Denholm, who blanked McDonogh on four saves, and an offensive attack that came at the Eagles in waves, Curley (11-1-1 overall) secured its 11th win of the season and improved to 9-0-0 in the always treacherous MIAA A Conference.

“It was a great win for us,” said Curleycoach Barry Stitz. “They are always the class of the league. This game was closer than the score. We created a decent amount of chances, and scored three goals, and when you score three goals, you’re going to win a lot of games, but more importantly we didn’t give up any today.”

Senior forward Jalen Anderson put Curley one top at the 28-minute mark of the first half when he followed up his own shot, which was stopped on a sliding save by McDonogh goalie Connor Smith, only to return to Anderson who got enough on the ball to roll back into the goal and give the Friars a 1-0 lead

“Tyler Harry turned, and played me a great ball, and I was able to push through the defense, and I hit the ball, and I was fortunate that it went in the goal,” said Anderson.

Bryce Woodward ended any lingering suspense about the outcome when he gave the Friars added insurance, with 15 minutes to go in regulation, when he creased the net.

“Anthony Schlee held up the ball and found me,” said Woodward. “The defender had a mishap, and I got lucky, and was able to capitalize to give us another goal.”

The senior forward also said the key to Curley’s success thus far has been the chemistry.

“We’ve been playing together for several years and we bond well both on and off the field. This was a good win because McDonogh is a great team; they’re very strong, and always contenders.”

As Stitz stated, the game was close in the first half and McDonogh did assert itself for a good seven minutes in the middle of the opening half, yet were unable to find an equalizer.

“We missed a couple of shots, that should have been goals, but to their credit, they finished a few chances and they deserved to win,” said McDonogh coach Brandon Quaranta. “A few minutes late in the first half, and early in the second half, when we were down by a goal, if we had gotten a goal, it changes things.

We had a lot of chances to draw even, and we weren’t able to. We hit the crossbar twice within the span of a minute or so, at one point, but Curley made the plays today and we didn’t. When you miss chances against a good team, they can punish you, and that’s what they did today.”

Stitz knows McDonogh (8-4-1, 6-3), which still leads the Black Division of the A Conference, will be a factor come the post-season.

“Hats off to them,” said Stitz. “They played hard and they hit the post a couple of times today, but the key for us was, we had a lot of guys that were really working hard, and we are now doing a lot by committee, which makes us hard to defend. It’s hard for any opponent to key on any one player.”

Stitz also praised his team’s defense, and he singled out Denholm.

“Chris did a great job. He’s real good coming off his line, and he is quick coming off the line and making saves.”

He praised the Eagles’ Joel Brown, Mason Christian and Richie Nichols for putting pressure on him all day. “They put pressure on us, but our center backs and wing backs helped out, and even though they got a few shots off, I was able to get a hand on a few of them.”