Semaj Henson captures the last of his three touchdown receptions for Mount St. Joseph Saturday afternoon. The junior finished with four catches for 95 yards, leading the No. 3 Gaels to a 35-0 victory over fourth-ranked Calvert Hall College in a MIAA A Conference football semifinal contest at Plevyak Field in Irvington.

Henson finished with four catches for 95 yards, including scoring plays of 80, four and seven yards. The Gaels have been sparked this fall by a dynamic passing game with tall bookends in 6-foot-4 Dont’e Thornton and 6-3 Tyler Wilkins and lethal 5-7 slot Ausar Crawley.

Henson, a 5-7 junior, said he was ready to have an impact in the Gaels’ biggest game to date.

“I told Coach [Rich Holzer] I was going to step up to the plate this week,” said Henson. “I had to do what I was suppose to do.”

“Semaj has been the No. 4 guy all year and been overlooked, but he’s really fast,” said Holzer. “He’s been waiting for the right time to breakout and he picked a good time to do it.”

On the first play of the Gaels’ second possession, Henson caught Billy Atkins’ quick-pop pass across the middle and went untouched to the end zone. He grabbed a short toss from Atkins (16-of-20, 273 yards) capping a 10-play, 82-yard drive, giving St. Joe a 14-0 advantage with 3 minutes, 41 seconds left in the second quarter.

“I put it in his hands and he made a play,” said Atkins about his first hookup with Henson. “It set the tone for the whole game.”

The Gaels took their first possession in the second half 59 yards in six plays as Wax, who had a scintillating 58-yard catch-and-run, capped the series with a two-yard run. Henson got the hat trick with a 7-yard catch late in the third quarter.

St. Joe’s defense, whose progression this year has put the Gaels on the verge of a championship, got a pick-six from junior defensive back Jabari Echols to start a running clock for the second straight game. Junior linebacker Brandon Fique had 1 1/2 sack and a fumble recovery, and Nate Slutzky and junior Terry Hardy each added a sack.

It’s the first shutout in the MIAA A playoff era.

“All year, we’ve been trying to be the best defense in the country,” said Gael senior defensive linemen Tyler Leavy, who had a half-sack. “We knew Calvert Hall wanted to run the ball, and if we stopped the run, they had to rely on the pass and I know my db’s [defensive backs] could stop it.”

Calvert Hall (8-3), the only team to play in all four MIAA A postseasons, crossed midfield twice Saturday and didn’t reach the red zone (farthest penetration was to St. Joe’s 31). The Cardinals finished with 141 offensive yards.

Calvert Hall coach Donald Davis, whose team lost to the Gaels, 20-10, in the MIAA A opener for both in late September, expected a different effort Saturday.

“The kids had a really good week of practice, they worked hard and was prepared,” said Davis, whose team last won the MIAA A title in 2010. “St. Joe was better than us in every phase of the game.”

The Cardinals turn their attention to the historic 100th meeting with Loyola Blakefield, Thanksgiving morning at Towson University’s Johnny Unitas Stadium. The Dons will bring a 49-42-8 advantage into the centennial match, but The Hall has claimed nine of the last 10.

After not having a regular season or postseason tournament in 2018 in the aftermath of the St. Frances Academy controversy, the MIAA A championship comes down to Mount St. Joseph and McDonogh School. The Eagles, who rallied late to defeat No. 9 Spalding, in the other semifinal Friday evening, got a late touchdown to turn back the Gaels, 14-7, last month in Irvington. 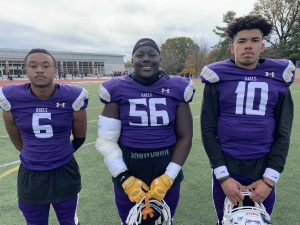 Semaj Henson (left), Tyler Leavy and Billy Atkins each had big efforts for Mount St. Joseph Saturday. Henson caught three touchdowns from Atkins and Leavy was a part of a defensive shutout as the Gaels advanced to the MIAA A Conference final against No. 2 McDonogh School, Saturday at 7:30 p.m. at Archbishop Spalding’s Whittles Field.

“McDonogh is huge up front and got great skill players in the back end. It’s going to be tough and I’m expecting a similar type game,” said Holzer. “Hopefully, we can make enough plays to come out on top this time.”

“It’s going to take a lot of effort…it’s not going to be easy,” said Henson. “We have to execute and do what we’re supposed to do. Stay focused and get the win.”