No. 1 Roland Park’s depth, defense keys win over McDonogh in IAAM A basketball; McLean and Henson combine for 28 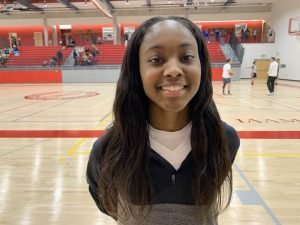 by Nelson Coffin
Although it may not have been the most aesthetically pleasing performance of the season, a hard-fought 48-43 triumph over No. 3 McDonogh School on Monday night looked pretty good to top-ranked Roland Park Country School’s basketball squad.
The Reds (20-1 overall), knocked a little off kilter last week when junior guard Rain Green’s season ended abruptly due to an ACL injury, found a way to expand their playing rotation just enough to prevail in the defensive struggle that kept them atop the IAAM A Conference with a perfect 11-0 mark.
“It was a big adjustment playing without Rain,” said Roland Park coach Dani Kell Steinbach, whose team is ranked 21st nationally by USA Today. “We just had to practice and play together as a team. It was next Reds up.”
With a trip to VSN’s No. 2 St. Frances Academy — weather permitting — on tap for Wednesday in East Baltimore, the win was a must for Roland Park’s goal of garnering a top seed in the postseason playoffs that begin Feb. 12.
“McDonogh is so well coached that we knew they would come in with a game plan to make us uncomfortable,” Steinbach added. “We just had to control the controllables and play together.”
Without Green, the team’s best defensive stopper, Roland Park senior guard Ja’Niah Henson had to step to the fore, and the Morgan State University-bound point guard did just that.
Henson guarded senior sharpshooter Aleah Nelson, who led the Eagles (16-4, 7-3 IAAM A) with 14 points Monday and put a scare into the Reds in the closing minutes by nailing a baseline three-pointer before coaxing a runner through the cylinder moments later.
“Aleah had 31 (points) the last time we played them,” Henson said. “Our defense was critical (to the win).”
Nelson’s final basket of the game sliced Roland Park’s lead to 44-40 with 1 minute, 22 seconds remaining in regulation.
Fortunately for the Reds, Henson then knocked down a pair of free throws for a team that went 14-for-18 from the line in the contest.
Henson was also instrumental to the victory earlier in the game, especially when she had two of her team-best six steals late in the first half that she turned into layups while helping Roland Park to a 23-17 halftime advantage.
Other contributors included junior forward Mir McLean (15 points, 5 rebounds), senior combo guard Maria Ferariu (11 points, 5 rebounds, 2 steals, block) and senior forward Christyn Robinson (4 points, 7 rebounds, steal, block).
And freshman guard Myah Simmons added a key three-ball in the third period that ignited a 10-1 run that put the Reds ahead by double digits, 36-25, late in the quarter. Roland Park still led by 11 with time slipping away before the Eagles rallied to make it close with a 10-4 closing spurt.
The Reds’ final bucket, on a coast-to-coast finish by sophomore guard Jayla Oden, put the visitors within reach, at 46-43, of completing a stunning comeback with 19 seconds remaining in regulation.
Much to McDonogh coach Brad Rees’ dismay, one of his players fouled Ferariu, who swished both of her tries from the stripe and Roland Park secured the verdict.
“Losing a kid like Rain really hurts Roland Park,” said Rees, who should know since he has been without the services of standout Jessica Booth this season due to an ACL injury. “But Roland Park is really well coached. And everybody else who filled in for them did a really good job. They did the little stuff well, and that’s why they beat us.”
NO. 1 ROLAND PARK COUNTRY SCHOOL 48, NO. 3 MCDONOGH SCHOOL 43
McDonogh: Aleah Nelson 14, AJ Davis, 13, Treasure Valdez 6, Jayla Oden 6, Nekhu Mitchell 4. Totals 16 7-11 43.
Roland Park Country: Mir McLean 15, Ja’Niah Henson 13, Maria Ferariu 11, Myah Simmons 5, Christyn Robinson 4. Totals 16 14-18 48.
MCD 13 4 12 14 — 43
RPCS 13 10 15 10 — 48