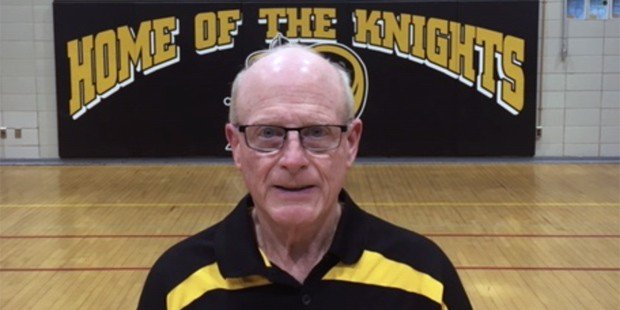 At 5-foot-7, 151 pounds, Parkville coach Desi McNelis hardly seems an intimidating figure, and, at age 64, his high school and collegiate exploits as a soccer player, weight-lifter, cross country runner, and, ultimately, a wrestler have taken their toll.

“I’ve had both hips replaced and two revisions on the right side,” said McNelis, in his 39th-year teaching the sport. “I’m sure that the underlying problem is congenital arthritis.”

“When we’re doing upper body stuff, he can still toss you, so don’t get it twisted,” said Parkville assistant Caleb Moore, a 37-year-old Patterson High graduate and third-place state finisher at 152-pounds. “A couple of wrestlers will try to grab him up, but his strength, balance and his sprawl are still there and he can still throw you.”

Former assistants include Truitt, Pete Chakmakis, Andy Schnydman and Gary Persinger, the latter of whom worked alongside McNelis for nine years at Dulaney.

“Desi and I co-coached together at Dulaney in 1998-99,” said Chakmakis. “Desi had the first state champs at Dulaney with Andrew Schlaffer, Matt Jacobs and James Knox, because Dulaney had never had a state champ before that.”

As a senior, Jacobs defeated eventual state champ, Tony Mack of Owings Mills, 5-4, for the county title on a third-period reversal, employing a move McNelis called “the funk,” and he yielded only one point per match in each of his four bouts at states.

“Desi McNelis was an old school coach where he didn’t go soft on his wrestlers in practice or when crafting the lineup. At the same time, he did not raise his voice because he did not need to as he gained the wrestlers respect with his calm demeanor, sound match plan for the individual and for the team, and because of the high-percentage technical moves he taught us,” said Jacobs.

“As an individual, I attribute much success of my defensive style to Coach McNelis. He aided in honing my riding ability, which included putting in the boots, of which he was a master. Smaller concepts such as hand-fighting and ‘playing the game within the game’ were another specialty of his that helped me gain an edge, mentally and literally. He would work with the wrestler by teaching the moves that helped their style most.”

Senior county and regional champion Rasim Aliev was unbeaten at 38-0 in 2018 when his season ended as the result of a skin condition, and McNelis’ best wrestler this year is 170-pound senior Anthony Sekulow with a mark of 22-2.

“One of my most memorable coaching moments was winning the MIAA B Conference championship in my last year at St. Paul’s in 1998. Another would have to be when I got my 400th win at St. Paul’s. The biggest moment of my career was the honor of being inducted into the National Wrestling Hall of Fame in 2006,” said McNelis, who has been married for 23 years to Mary Jude, with a pair of daughters, Meaghan, 30, and Tina, 16.

“My wife and daughters have always been supportive of my coaching despite the time commitment it takes. A team is always successful when it has good coaches and a supportive administration, and I have been lucky to have found a good coaching staff and very supportive athletic director here at Parkville. I thank them for recommending me for the position at Parkville.”

McNelis is a 1973 graduate of Loyola High, where he captained the Dons’ wrestling team, placing fourth and third in the MSA’s as a junior and a senior at 112-pounds despite only beginning his grappling career as a freshman.

“I only wrestled two junior varsity matches as a freshman,” said McNelis. “But, then, I went .500 as a varsity sophomore and started my junior and senior seasons.”

McNelis placed third in the Mason-Dixon Conference as a Loyola College freshman in 1974, a season that began with his winning initial 118-pound match, 12-6, over former Overlea High state champ Steve Lazzaro.

As a sophomore at Essex Community College in 1975, McNelis was named Outstanding Wrestler in the JuCo State Tournament, his 118-pound title-winning victory being over a prestigious wrestler from Montgomery College in Rockville.

“These were my fourth and fifth years of college wrestling. When I first got there, I couldn’t beat their starting 118-pounder. But a year later, I was beating him,” said McNelis, who also lettered many times in cross-country at Loyola High and Essex.

“By my senior year, I had moved up to 126 and was pretty successful, but the starting 134-pounder was a two-time champion who wanted to drop down to 126, and the drop to 118, for me, was just too much, so I didn’t place at the tournament. But three weeks after the season, I beat the kid who placed third at 118 and who qualified for Division I Nationals in a 126-pound match in an open tournament.”

McNelis competed in wrestling year-round for 15 more seasons after college, becoming a Greco-Roman National Champion and earning All-American honors several times in both Freestyle and Greco-Roman.

“Six months after the 1984 Olympics, I beat the Puerto Rican wrestler who placed fourth at those Olympics,” said McNelis, of a 136-pound open tournament. “The guy was from New Jersey, but represented Puerto Rico, which is how I found out that I could later compete for Ireland, being that both of my parents were born there. I have dual citizenship with Ireland.”

As a runner, McNelis has placed as high as 19th overall in the Maryland Marathon as well as being part of a record-setting relay team in “around 1980,” he said. The mark lasted in the Guinness Book of World Records for more than 16 years, said McNelis, who has also won a Mid-Atlantic title for weightlifting as well as a state title in Judo.

How long will McNelis continue to do it?

“Well, I promised my freshman, last year, that I would coach them until they graduate,” said McNelis, with a caveat. “That means two more years. I will be retired from teaching by then, and who knows what may happen?”