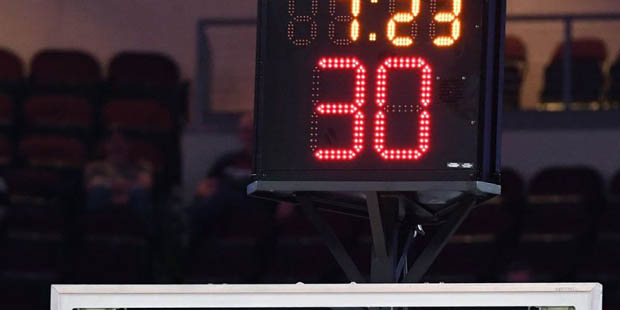 The National Federation of High Schools Associations has rejected, once again, a proposed rule that would mandate a nationwide 35-second shot clock in high school basketball. Further, the NFHS also failed to approve a proposal that would allow individual states to mandate a shot clock on a state-by-state basis.

Maryland is one of eight states which permits shot clocks for public schools. California, Massachusetts, New York, North Dakota, Rhode Island, South Dakota and Washington are the others.

“Information was given to the Basketball Rules Committee that shared the votes in individual states on how coaches and officials voted in support of or non-support of the shot clock rule,” said Theresia Wynns, NFHS director of sports and liaison to the Basketball Rules Committee. “The conversation among the committee members explored the pros and cons of enacting the proposal as a rule for all states and likewise for state adoption. The committee will continue to explore the shot clock issue.”

These were among the topics discussed by the National Federation of State High School Associations (NFHS) Basketball Rules Committee at its annual meeting April 14-16. The rules meeting was held in an online format to comply with current health safety guidelines. All recommendations were subsequently approved by the NFHS Board of Directors.

In Maryland, most private school leagues have adopted a shot clock and had it in use for several seasons.

Rule 5-4-1 was one of three rules updated by the committee. It now states that a game is declared a forfeit if a coach is removed from the contest for unsporting conduct and no authorized school personnel are present to assume responsibility of the team.

“Most states have bylaws to cover the instance when no adult school staff is on the bench to attend to the team. Officials are not likely to read those bylaws and consequently not know that rule,” Wynns said. “Having the basketball rules cover such a situation helps the contest officials and coaches alike if such a situation were to arise.”

Rule 10-6-1 Penalty was also amended to clarify that an official is not required to provide a warning to a coach before a technical foul is given.

“This amends an existing rule that gave the impression that a warning was a prerequisite to ruling a technical foul,” Wynns. “Using the word ‘may’ helps one to understand that a warning is only an option.”

According to the 2018-19 NFHS High School Athletics Participation Survey, a total of 540,769 boys participated in basketball in 18,617 schools, and 399,067 girls participated in the sport in 18,210 schools across the country. It is the third-most popular sport for boys and girls.