Mustangs on the up and up 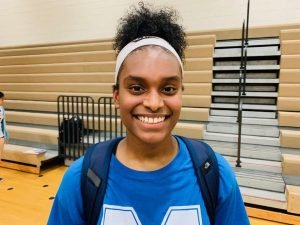 Senior Rheign Davis was huge in Marriotts Ridge maintaining its first-place reign in Howard County volleyball Monday. The undefeated Mustangs improved to 8-0 with a 4-set victory over 10th-ranked Howard in Marriottsville.

Marriotts Ridge volleyball coach Jamie Bullock and her star middle-hitter Rheign Davis used words like “underrated” and “underestimated” to describe why the Mustangs were flying so far under the radar entering the 2019 campaign.

A case in point is that as recently as Sept. 24, Marriotts Ridge was nowhere to be found in the VSN Top 20, although since then the emerging Howard County power has zoomed up to No. 8 in the latest rankings after debuting at No. 20 on Sept. 29.

However, with the way the Mustangs are playing now, don’t be surprised if their rapid ascent continues.

Bullock said that having only two seniors on the squad — Davis and defensive specialist Meghan Kwon — made some people think that the Mustangs would be lacking this fall, even if the reality is something altogether different.

Despite their youth, when the chips are down, it’s captains Rheign Davis (13 kills, 6 blocks, 2 digs) and Brenna O’Reilly (3 kills, 17 digs, 37 assists) who make sure the Mustangs pull through.

That was certainly the case after the Lions roared back from several four-point deficits in the opening set — and trailed, 23-21 — to take the first set on an authoritative swing from their own freshman phenom Corinne Chau (7 kills, 12 digs).

“In that first set we were really putting the ball down,” Howard coach Allison Ose said. “But then they adjusted their defense and started digging everything out.”

And while Howard was playing some pretty good defense in its own right, with junior libero Kathy Raveras (30 digs) and junior setter Jordan Redmiles (21 digs) leading the way, it still could not match the Mustangs’ rejuvenated offense that was able to build a 23-16 advantage in the second set before the Lions cut the lead to two points on another Chau kill before succumbing.

The third set was less competitive, considering that the hosts bolted to a 15-7 lead after a kill by junior middle/right side hitter Rachel George.

The Lions would eventually slice into the deficit on an ace by Redmiles to make it 19-16 before Marriotts Ridge closed on a 6-2 run started and ended with kills by junior outside hitter/defensive specialist Julia Mamo. who finished the match with 12 kills and 12 digs.

After trailing, 19-14, in the fourth set, Howard closed to within 24-22 after a block by senior middle blocker Emma Marthins until being unable to stop a Mamo blast down the line to sew up the match for the Mustangs.

Rheign Davis said that her team’s serving has improved dramatically this season.

“We knew we had to focus in on our serves,” she said. “And we just never give up on ourselves.”

Speaking of serving, the Lions did pretty well from the service line as well, judging by their 92.2 percent success rate in the match.

It was their .108 hitting percentage, though, that ultimately led to their demise.

Still, Ose was proud of how her team refused to yield even when things looked bleak.

“We’re a young team, but we’re a tough team,” she said. “We fight through everything.”

Howard will have a couple of days to relax before hosting No. 11 Mount Hebron on Thursday while the Mustangs hit the road to test 17th-ranked River Hill the same day.