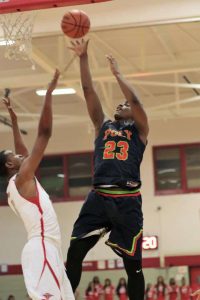 Poly’s Brandon Murray (23) shoots over Edmondson’s Marcus Hocker during Tuesday’s Baltimore City boys basketball contest. Murray scored 12 of his 19 points in the fourth quarter, including a 3-pointer with 1.9 seconds left in regulation, giving the fourth-ranked Engineers a 49-48 victory over the No. 11 Red Storm in West Baltimore. (photo – Jimmy Fields Sr.)

With its top scorer shelved, Poly High boys basketball needed someone to fill the void against Edmondson Tuesday. It took three quarters, but Brandon Murray answered the call.

Murray drained a 3-pointer with 1.9 seconds left in regulation, giving the fourth-ranked Engineers a 49-48 victory over 11th-ranked Edmondson in Baltimore City action.

Murray, a junior, finished with a game-high 19 points for the Engineers (10-5 overall), and junior guard Rahim Ali added 11. Marcus Hocker and Keith Bolden each had 15 points for Edmondson (13-2).

Playing its second game in as many days (third game in four days), Poly worked back from an early deficit. The Engineers did it without standout forward Justin Lewis.

With his No. 23 jersey, Murray did a pretty good impression of NBA icon Michael Jordan early Tuesday evening. The 6-foot-5 wing forward scored 12 points in the fourth quarter, the last a dagger in front of the Engineers’ bench.

“It felt real good coming out of my hands. I’m always locked in – that’s just it,” said Murray. “We really missed Justin, but the adversity hit and we just came through. We all knew we were down at halftime, but we push through things like this.”

Murray, who spent his freshman year at Boys’ Latin School, joined the Engineers about a month ago after sitting out for academic reasons.

“He’s a real versatile player. He can guard multiple positions,” said Brand. “We’ve seen how good he is for a while but it’s a difference between being good and playing well on the floor, especially environments like this.”

Brand said he challenged Murray at halftime. Poly, trailing by as many as nine points, trailed by 31-26 at halftime. After cobbling five points early in the third, Murray was quiet the remainder of the quarter.

Then, came the fourth. Murray scored the Engineers’ first six points, capped with a jumper inside the 3-point arch, giving Poly a 41-40 advantage – its first lead since game’s opening two minutes.

Murray bounced a pass inside to Amani Walker who finished for a 43-42 lead midway in the fourth. Bolden dropped a 3-pointer giving Edmondson the lead back.

Walker returned the favor to Murray, getting a pass in the paint and finding Murray coming down the baseline for the finish and was fouled with 17.7 seconds left in regulation. He completed the 3-point play for a 46-45 Poly lead.

Sophomore guard Eontae Nelson regained the lead for Edmondson with a 3-pointer, setting off a mild celebration. After a quick Poly timeout and then a delay to determine how much time remained, the Engineers had 11.1 seconds left.

Ali got the ball off the inbounds. He bounced a pass to Walker, whose arching shot went clean through the cylinder.

“He’s a tough player,” said Ali. “I came off the screen and saw Brandon opened. He was the wrong person to leave.”

Brand, whose team blew a 14-point lead against Patterson in the fourth quarter before falling in overtime, was pleased to see his team execute in the critical final moments.

“At the very end, our point guard did exactly what I asked him, we got the ball exactly where we wanted to and the game ended in our favor,” Brand said. “Seasons are about learning lessons and moving forward.”

Edmondson wasn’t able to get a final shot as Ali stole the inbound pass. The Red Storm controlled play in the first half, but made several mistakes in the closing minutes.

“My hat goes off to the kids. They followed my game plan,” said Edmondson coach Darnell Dantzler. “We didn’t get to a couple of loose balls down the stretch. Poly made big shots down the stretch. It was Baltimore City basketball.”

The loss didn’t hurt the Red Storm, who are undefeated in the city’s league B Division with Mervo and No. 8 Lake Clifton. The top team in the B Division will likely play current A Division leader and No. 3 Patterson for the city title next month.

Poly, which lost to Westtown (PA) Monday afternoon in Pittsburgh, will get Lewis back Thursday (play National Academy Foundation). Saturday, the Engineers take on No. 2 St. Frances Academy in the William Wells Classic at SECU Arena.

“We want to be adverse situations. I think sometimes we’re put in some we didn’t bargained for,” said Brand. “I’m really proud of how we responded in this one. That’s Poly basketball.”