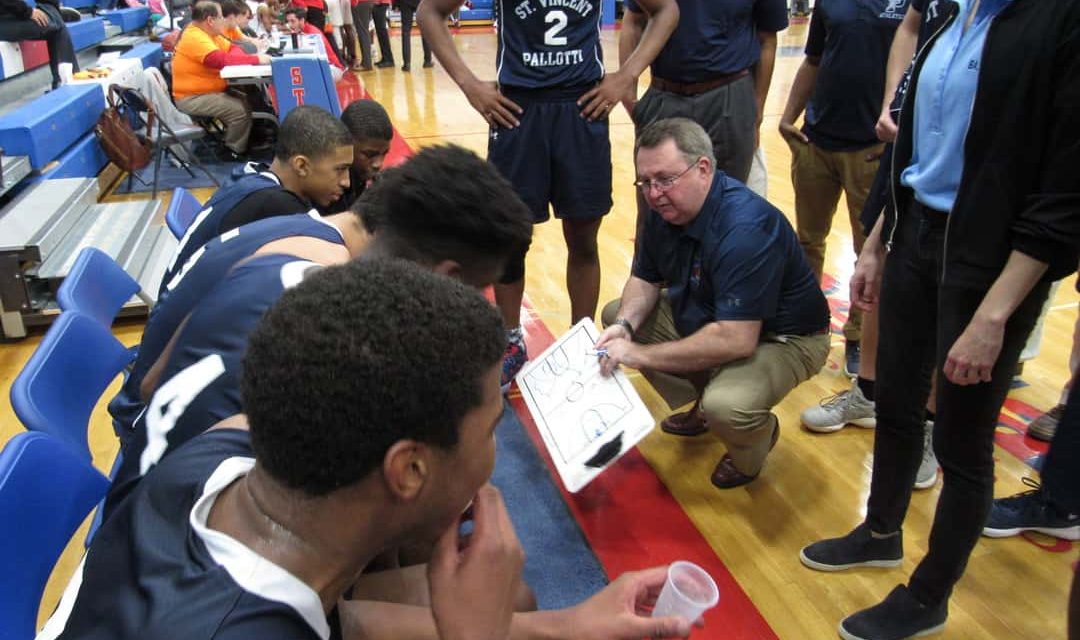 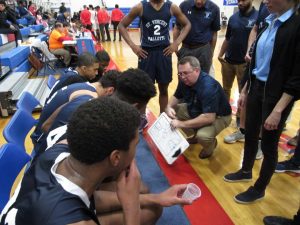 Dennis Murphy (kneeling) talks to the Pallotti boys basketball team during a timeout at the Charm City Challenge mixer at DeMatha Catholic last December. Pallotti announced that Murphy will not return as coach after six seasons.

by Derek Toney
Dennis Murphy, who guided St. Vincent Pallotti High boys basketball the past six seasons, will not be returning as coach next season.
“I feel we became relevant and I’m proud of how we did it,” said Murphy. “I think I pushed the program as far as I could. I wish the kids well.”

Murphy went 95-77 at the Laurel private school, including a 14-15 mark this past season. The Panthers went 9-9 in MIAA A play, missing the postseason by a game.

Pallotti had its finest season under Murphy in 2017-18 (23-11), reaching the MIAA A Conference playoffs and finished No. 9 in the final VSN Top 20 poll. The Panthers defeated then-No. 1 St. Frances Academy during the regular season, before dropping a 56-54 decision to eventual MIAA A finalist Boys’ Latin in the playoffs’ opening round.

“Pallotti High School would like to thank Coach Murphy for his hard work, dedication and contribution to building a strong basketball program over the past 6 years,” said Pallotti Athletic Director Pat Courtemanche in a statement. “Coach Murphy set the standard for winning in the MIAA A Conference and his service should be commended. We would like to wish him the best in his future endeavors.”