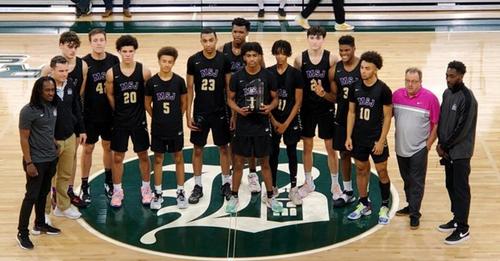 Tucker and Hansberry lead the way

The Gaels broke open the game with a 16-5 run in the third quarter after STAB had pulled within 7. Bryson Tucker led St. Joe with 25 points and Amani Hansberry had a monster double-double with 17 points and 15 rebounds. Both Tucker and Hansberry were named to the All-Tournament Team with Hansberry winning MVP honors.

Josh Rivers took the lead for the Cavaliers, scoring 22 points, with six 3-pointers, and collecting 4 rebounds.

No. 1 St. Frances wrapped up a 2-1 visit to the Chick-fil-a Classic in Columbia, SC, Thursday, with a 74-49 rout of Huntington Prep (WV) in the 5th-place consolation game.

It was the second win of the year for the Panthers over Huntington Prep, which it defeated at the DeMatha Showcase in early December.

St. Frances got another sensation shooting performance from Bryce Lindsey, who connected for seven 3-pointers and a game-high 20 points in the victory. Daquan Davis also had four 3-pointers and scored 16 points to earn a spot on the All-Tournament Team. In addition, Jahnathan Lamothe and Carlton Carrington combined to give the Panthers 26 points and 9 rebounds and Cortez Johnson had a team-high 7 rebounds.