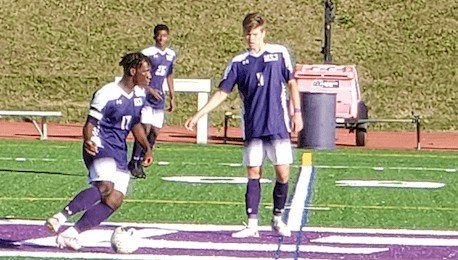 Mount Saint Joseph made it three in a row in the Baltimore Catholic Soccer League with an impressive 4-1 win over visiting John Carroll, in Irvington on Friday afternoon, in perfect weather conditions.

At 3-0, the Gaels are the only undefeated team in the six-team loop. 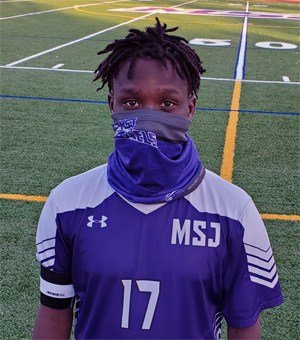 Tyquan Stroud had a hand in three MSJ goals as the Gaels defeated John Carroll, 4-1.

Tyquan Stroud lead the Gael attack on Friday. The talented senior broke a scoreless tie half-way through the first half, and he assisted on a second goal, five minutes later, to give the Mount a 2-0 advantage.

The Patriots got a goal from Ryan Skandalis with 11 minutes to go in the first half to cut St. Joe’s lead to 2-1.

The play of Patrots’ keeper Ethan Wagner kept it close for the following 30 minutes of play, until Stroud figured in the Gaels’ third goal at 19:47 in the second half, when he got behind the JC defense.

Stroud got the ball to Van Danielson, who took a perfect touch down the line, and played it toward the box. Shan Chung converted the feed from Danielson to make it 3-1, and the Mount cruised the rest of the way.

“We had a great performance and everyone that went in, made an impact today,” said Stroud. “They are a very good team. They have a lot of good attacking players. We did a good job defensively, and offensively we did a good job of moving the ball.”

Coach St. Martin assessed the role of his substitutions, as well.

“We always talk about our depth, and when guys aren’t playing their “A” game, we can always put somebody else in, and they will do the job,” said St. Martin. “It pushes everybody to make themselves better.

“When we made substitutions today, the level of play didn’t drop off. As a matter of fact, I think it went up, and we started knocking the ball around better.”

John Carroll put us under pressure, especially in the first half, and after half-time we settled in and did a better job.”

St. Martin praised the play of both keepers.

On JC’s Wagner, St. Martin said, “He made some big saves, and a couple were one-on-one, and he did a phenomenal job.”

The veteran coach also heaped praise on his own keeper.

“Joel Fenstermacher did a great job. He came up big, punching a few out, and holding on to a couple of balls off free kicks.”

“When we make simple mistakes, like neglecting responsibilities for assignments in the box, or poor clearances, or poor giveaways, we’re hurting ourselves. We can’t give up simple, set-piece goals. Today’s game was much closer then what the score indicated. We travel to Spalding next Wednesday, where we will try to make simple fixes to get to 2-2.”

The Gaels will try to stay unbeaten when they travel to Blakefield next Wednesday to take on Loyola.