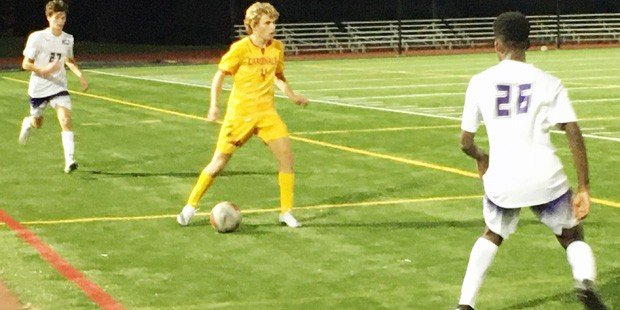 Veteran Gaels hold off a young, but rapidly developing Cardinals

When Mount St. Joseph High squandered a couple of promising scoring chances in the opening minute of a Catholic League soccer match against Calvert Hall College on Wednesday afternoon at Paul Angelo Russo Stadium, the Gaels could have paved the way for a much more relaxed afternoon on the pitch against a less experienced rival. 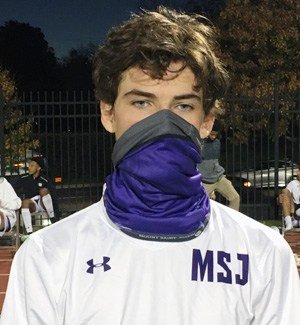 Mount St. Joe’s Miles Lam scored the deciding goal with 21 minutes remaining in regulation in a 3-2 win over Calvert Hall on Wednesday in Towson to help the Gaels win for the second time this season. The senior also assisted junior Brian St. Martin on the only score of the first half.

As it was, the Gaels still managed to escape with a 3-2 triumph over the young Cardinals in a match that went right down to the wire.

That said, Mount St. Joe never trailed in the battle that left it with a 2-0 record and sole possession of first place in the Catholic League as its only unbeaten team.

“I felt we had a lot of opportunities early, especially in the first 30 seconds,” Mount St. Joe coach Mike St. Martin said.

The Gaels still inched ahead, 1-0, on a goal by Brian St. Martin, who headed in a corner kick by senior senior Miles Lam midway through the first half.

The deadlock lasted just over three minutes before the Gaels broke back on top on senior Hunter Murphy’s finish of a well-placed free kick by senior Tyquan Stroud that just sailed beyond the Calvert Hall backline and onto Murphy’s foot.

Lam then put the Gaels up, 3-1, in the 51st minute on a quick strike assisted by sophomore forward Shan Chung.

“Shan played the ball into the box and then got it to me,” said Lam, who is headed to American University next fall. “I one-timed it to the near post.”

Although Mike St. Martin told his team that it did not play particularly well, garnering a road win is never easy.

“It just shows how good of a team we are,” Lam said, adding that the Gaels’ deep bench paid off in the victory.

Calvert Hall pulled to within a goal with just over 14 minutes left in regulation on senior forward Payton Madore’s penalty kick.

“I thought the PK was a little questionable,” Mike St. Martin said. “It certainly made things more hectic for us.”

It also forced the Gaels to add another back and take out a striker to prevent Calvert Hall from sending the game into overtime.

A last-ditch shot by Monath was gobbled up by St. Joe senior goalie Joel Fenstermacher, who had a busy second half.

His best stop was a diving one-hander that denied a strong Organt drive just after the intermission to finish his 40 minutes of work with six saves.

Starting keeper Dom Jones had three saves in the first half.

On the other side of the field, sophomore Nate Jones showed some acrobatics of his own in turning away senior Alec Carey in the first half and stuffed Brian St. Martin with a nimble kick-save to open the second stanza.

Calvert Hall coach Rich Zinkand, a teammate of Mike St. Martin on the Cards’ 1986 Maryland Scholastic Association A Conference championship team that went 21-0, said that he was pleased with how his team performed in the loss.

“We have seven sophomores starting for us,” he said. “Obviously, we weren’t really ready last year. But I thought we created some good opportunities against an experienced team today.”

Pictured above: Calvert Hall junior back Will Andrus looks to move the ball past Mount St. Joe junior Andre Isreal as Gael teammate Miles Lam closes in from behind in a Catholic League soccer match at Paul Angelo Russo Stadium on Wednesday.