MSJ makes it three in a row

The Cavaliers (9-7, 6-5, 3-3) were coming off a lopsided 100-74 over John Carroll on Wednesday night, when sophomores Cam Whitmore and CJ Scott poured in 28 and 27 points, respectively, for coach Josh Pratt.

Friday night was much different. The Cavs held a 5-2 advantage in the first two minutes of play when Scott hit a deuce and a trey, but St. Joe went on a tear, with 17 unanswered points, to close out the first quarter with a 22-6 lead. The Gaels outscored Spalding 11-8 in an uneventful second quarter to take a 30-17 lead at the half. 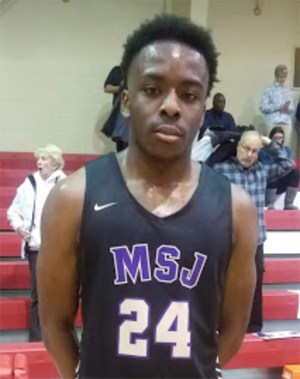 Jason Edokpayi lead MSJ with 27 points with eight in third and nine in fourth to keep Spalding at bay.

The Cavs got hot in the third stanza behind Scott (11 points), and Jordan Pennick (8), and they got within six, at 45-39, heading into the final quarter.

The Gaels (13-3 overall, 6-2 MIAA A, 5-2 BCL) pulled away in the first two minutes of the fourth quarter, on buckets from Cam Sapienza, Antonio Hanlon and an unstoppable Jason Edokpayi, to put the game out of reach. Edokpaki dunked eight of his game-high 27 points in second half, silencing a boisterous Spalding crowd, when it looked like the Cavs might make another run.

After back-to-back slams at 5:21 in the fourth, Ausar Crawley hit a jumper, Sapienza drilled a three, and Coach Pat Clatchey’s team took an insurmountable 60-46 lead with three minutes to play.

“At the five minute mark in the fourth, once we started attacking, controlling the ball, and getting more stops, we will we were able to break the game open,” said Clatchey. “I wasn’t real pleased with how we played, because in the first quarter we played well, but we weren’t able to sustain that.

“Spalding’s Whitmore and Scott are very talented, and when Pennick got hot in the third quarter, it helped keep them in the game.”

Clatchey was happy with the play of his guards, and the outstanding effort that he got from Edokpayi.

“Our guards give us a lot of depth, and a lot of versatility. Jason has had a great season. He has matured. He’s been real consistent; he controls the defensive glass, knows how to get open on offense, and he is demonstrating that he will make a very good Division 1 player.”

Edokpayi said, “I came into this game with the mentality that anyone on their roster would have a tough time guarding me. I got open, and my guys were getting the ball to me inside, and it seemed like I was able to take advantage of mis-matches the whole game.

“It takes time for us every season to get on a roll, but once we do, we can be one of the best teams in the area in the A Conference and in the Baltimore Catholic League. We came off that loss to Boys Latin last Friday, and we had a team meeting on Saturday, and we made up our minds to get it together.”

Since that team meeting, the Gaels have reeled off impressive wins over John Carroll, Loyola Blakefield and Spalding.

Cavalier coach Pratt said, “You can’t spot a good team like Mount Saint Joe a 16 point lead in the first quarter and expect to win.

“CJ (Scott) did some good things out there but it just wasn’t our night. We have to do a better job of executing on offense and getting back on defense.”

Scott lead the Cavs with 26 points, and Pennick and Whitmore each had 10.