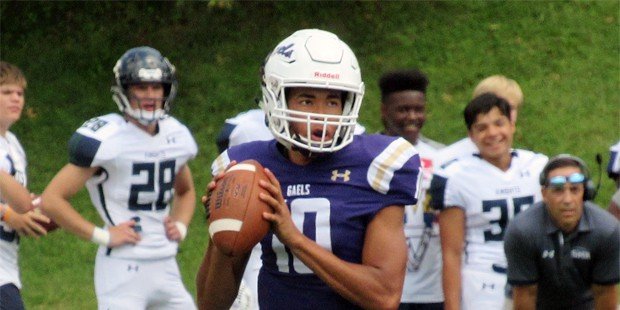 Atkins passes for 420 yards and three scores as the Gaels prevail 56-27; Wax runs for 130 and four touchdowns

The Mount St. Joseph offense could not have been much more prolific, Friday afternoon, as the Gaels throttled Holy Spirit (NJ) for 616 total yards, including an incredible 420 passing yards by quarterback Billy Atkins in a 56-27 St. Joe win, improving the Gaels to 2-0 in 2019.

Holy Spirit jumped in front on the games opening kickoff, as Patrick Smith scored on a 97-yard return, but St. Joe responded with a pair of touchdown runs by Marlowe Wax, who rushed 130 yards on 15 carries, to take a 14-7 lead after one quarter.

Wax would scored four touchdowns in the game, including one in the second quarter, where Atkins got his first two TD passes, and the Gaels led 35-14 at the half, to all but end the suspense of who would win.

Pictured above: St. Joe quarterback Billy Atkins, who passed for 420 yards and three touchdowns as the Gaels improved to 2-0 with a 56-27 win over Holy Spirit (NJ).