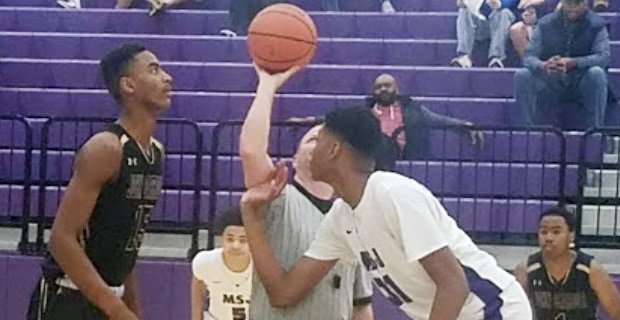 It was opening night in the Baltimore Catholic League at Mount St. Joseph, Monday, and the always powerful Gaels played host to John Carroll, the defending MIAA A Conference champions.

However, with McDonald’s All-American Emmanuel Quickley now at Kentucky and host of other stars from the Patriots’ championship squad now also departed, first-year JC head coach Seth Goldberg did not have the weapons to match-up, as St. Joe rolled to a 75-49 victory.

The Mount (2-0, 1-0 BCL) started quickly, jumping out to an 11-0 lead in the first six minutes and long-time coach Pat Clatchey got points from 10 different players, including five who reached double figures. 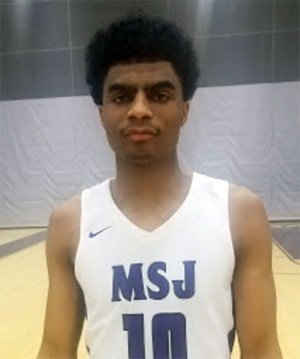 It was the 638th career win for Clatchey, now in his 27th year leading the Gaels’ highly successful program.

Javonte Brown, a 6-foot-10 junior transfer from Thornley School in Canada made his debut for Clatchey, and the rangy center made an immediate impact, scoring six of the Mount’s first 11 points inside.

“We don’t expect him to replicate what Jalen Smith did here, but Javonte is going to be an impact player on our team,” said Clatchey. “Jalen Smith (A McDonald’s All-American now at the University of Maryland) is probably going to be a number one pick in the NBA draft next year.”

Brown finished with 10 points all of which came in the first half.

Clatchey was especially pleased with the play of Bishop, Ausar Crawley, Hamlin and Brown.

“Besides James and Ausar, we really don’t have that much in game experience, but we’re a little deeper than we were last year both at the guard spot and up front,” said Clatchey. “We expect big things from Antonio (Hamlin). He is only a freshman, but he doesn’t play like a freshman. He is a very good, versatile player. He’s very assertive and very active.”

Clatchey emptied his bench during the third quarter after piling up a 55-33 lead over a very young Patriot team, now led by Goldberg, who took over at John Carroll this year as both head basketball coach and athletic director. Goldberg had a superb run at St Paul’s in Brooklandville, where he built a powerhouse team in the MIAA B Conference, during the last decade.

Clatchey said that Goldberg will be just as successfull at John Carroll as he was at St Paul’s.

Goldberg had high praise for Clarchey.

On his new role, Goldberg said, “We will be building a new culture now at John Carroll. We have some great players and there have been a lot of changes, but we’re getting better every day and despite tonight’s slow start we battled back and we’ll keep moving forward. I’m proud of this team”

Bishop said, “We have a lot of balance and a lot of depth, and a lot of strength at every position. It’s great to have Javonte inside.”

Brown was excited about being a Gael.

“It feels great to be part of Mount Saint Joe. The team welcomed me with open arms and I know I can play a role here.”

“He makes it easy for me, because he looks for me inside and he finds me with the ball.”