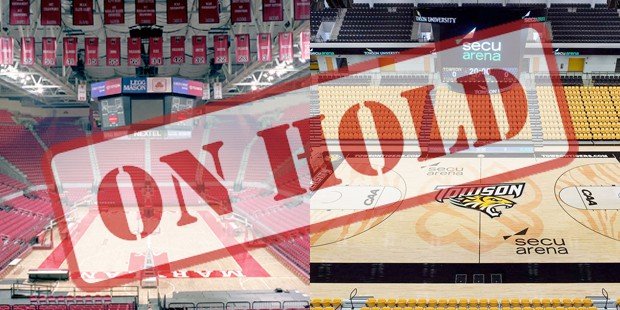 Stopping short of an out-right cancellation, the Maryland Public Secondary Schools Athletic Association (MPSSAA), announced a blanket postponement of its boys and girls state basketball championships, scheduled to be played Thursday thru Sunday, respectively, at the University of Maryland’s Xfinity Center and Towson University’s SECU Arena. The move is aimed at protecting the student-athletes and fans from the Covid-19 pandemic.

The brief announcement that appeared on the MPSSAA web site shortly after 1:00 p.m. on Thursday, less than two hours before the scheduled start of the state semifinal round, said the event was postponed until further notice and said more information would be forthcoming when it becomes available.

The move followed an announcement Wednesday evening that the boys and girls semifinals and finals would be played as scheduled, with attendees limited to just the players on the competing teams, their coaches and staff, their athletic trainers and administrators, and parents or legal guardians of the players, as well as essential event operations staff.

Following that announcement, news broke later Wednesday night that the NBA was suspending its season indefinitely. On Thursday, all of the major college men’s basketball tournaments were cancelled, including those already in progress. Major League Baseball has also announced a suspension of its operations which will delay the start of its regular season by at least two weeks. In addition, several major college conferences, including the Ivy League and Pac-10, suspended their spring sports seasons, and many other professional sports leagues have announced they have cancelled or suspended operations, or modified spectator attendance.

One other victim of the pandemic is the 2020 Alhambra Catholic Invitational Basketball Tournament, scheduled to take place Thursday thru Saturday at Frostburg State University. Top-ranked and Baltimore Catholic League champion St. Frances was scheduled to open that event against St. Stephen’s/St. Agnes (VA), on Thursday at 4:00 p.m.