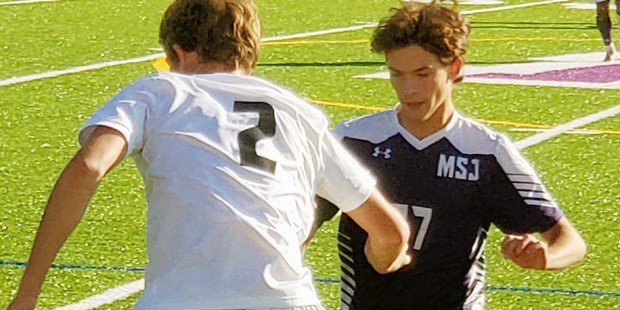 Danielson and Lam combine for two goals and two assists as Gaels turn back Curley, 3-1

Opening day for any team, in any sport, at any level, is always one of the most exciting days of the season. 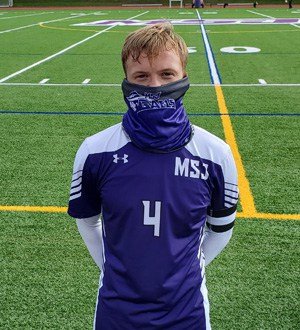 Van Danielson scored St. Joe’s first goal and then assisted on the second to help the Gaels to an opening game win over Curley.

In what has been a very trying year for the whole world thanks to COVID-19, an opening day “Catholic League” soccer game at Mount St. Joseph in Irvington, on Saturday morning, seemed to return a certain sense of normalcy for all of the participants.

With no fans in stands, and a smattering of onlookers peering through a fence from Frederick Road, behind the west goal, the host Gaels began their late-starting schedule with a hard earned 3-1 win over visiting Archbishop Curley.

The Mount scored first, eight minutes into the game, when senior captain Van Danielson found the net from 16 yards out.

“We were trying to isolate and get one-on-one and my strikers made some good runs to open up some space for me,” said Danielson. “I cut across the middle and hit it with a left foot, took a deflection which was fortunate, and we got the goal.”

Danielson also played a key role in what ultimately became the winning score, when he made a nifty feed to Miles Lam, with 5:39 to go in the first half, to give the Gaels a 2-0 advantage.

The Friars, who always play hard for coach Barry Stitz, got a spark heading into halftime, as they cut the MSJ lead to 2-1 with 16 seconds left in the first half, when Landon Berger tallied on a free kick from Zachery Sutherland.

The first 30 minutes of second half were intense, before Gaels’ junior Brian St. Martin scored on a corner kick from Lam at 9:09 remaining to put give the Gaels some breathing room. The junior who committed to the University of Maryland this week will follow his older brother Brett, a 2018 St. Joe grad, to College Park. Brett is currently a junior for the Terps’ men soccer squad. 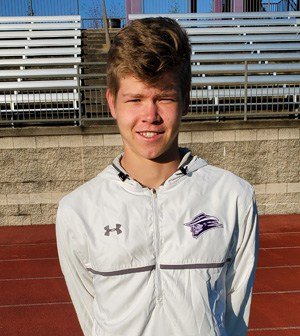 Junior Brian St. Martin iced the game by scoring MSJ’s third goal, just days after committing to play his college soccer at the University of Maryland.

Brian credited Lam on his goal. “Miles lofted a good ball to the back post, and I was there to finish it.”

He also had kind words for the Friars.

“They are a very good team and we knew we had to bring our “A” game to stay with them today.”

“It was a tough game. You always have to fight hard against them.”

Stitz talked about the irony of soccer in his post game remarks.

“We worked very hard and had our best stretch of the game for the 10 or 15 minutes before they got that third goal,” said Stitz. “That put the game out of reach. We had some good combinations and then they scored off a set piece.

The irony was that we scored off a corner kick, a set piece, as well, when we closed the gap to 2-1 at the end of the first half.”

Stitz was pleased with the play of his keeper, Mike Caulkins, in the second half.

“He made some real good saves and he did a great job of keeping us in the game. They’re one of the best teams in the league. They have a senior-laden team with a pedigree and they play hard.”

“I thought we knocked the ball around well but he made some phenomenal saves.”

Danielson summed up the thoughts of everyone on hand for this very special opening day.

“We were all super excited just to get a chance to play today.”