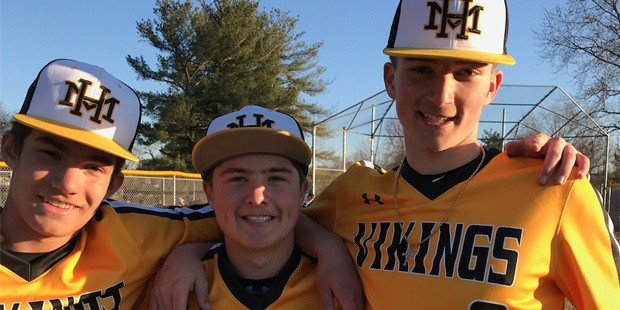 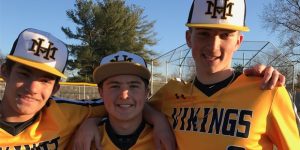 Magnus Dunn (left), Josh Barke and Tommy Fitzpatrick were clutch Wednesday for Mount Hebron baseball. The 16th-ranked Vikings knocked off No. 1 Howard, 3-2, in a Howard County contest in Ellicott City.

History repeated itself in Howard County on Wednesday afternoon, thanks to a clutch hit by sophomore Josh Barke and the pitching of a junior lefty and senior righty as No. 16 Mount Hebron High stunned top ranked Howard, 3-2, in a HoCo baseball game in Ellicott City.

The plan of Hebron coach Brian Culley to pitch lefty Magnus Dunn the first three innings and then have righthander Tommy Fitzpatrick go the final four frames worked to perfection. The Vikings’ hurlers made Culley look like a genius as they pulled off the huge win.

“I’m really proud of the kids,” said Culley, who said before the season that he expected his guys to compete for the county championship. “They proved they can play with anybody. We just have to keep getting better. We’re young, but I think we’re ready to make the jump (up to the higher echelon with the top contenders).”

The upset by the Vikings (3-0 overall and Howard) terminated Howard’s 7-game winning streak dating back to the Lions’ 2018 Class 4A state championship season. The Lions (2-1, 2-1 Howard) lost their final two regular season games in 2018 and proceeded to win five consecutive games in the post season, culminating with Lions’ first state championship.

Howard finished 20-5 overall in their banner season with one of their losses to Mount Hebron, 5-3.

“Today was basically the same kind of game and we beat Brendan Foster again,” said Tommy Fitzpatrick, a first-year varsity hurler who went four scoreless innings to close out the win Wednesday.  “We made Foster work.”

Foster put two Vikings on in the bottom of the fourth with one out, the second on a base on balls and Howard coach Nick Hoffner removed him for lefty Ben Fader. Fader gave up the game-winning hit to Barke, a two-run double to left on what the latter said was a “hanging change-up. It felt great.”

Finnian Devine and Dunn  scored on what proved to be Barke’s game-winning shot.

“I thought Brendan threw well in what was his first time out this season,” said Hoffner. “But he has to build up his stamina. We didn’t do the little things to win and we had some opportunities and didn’t take advantage.”

Howard scored twice in the top of the third with a two-bagger by Brian Jakubek the big blow for the Lions after Hebron had taken a 1-0 lead in the bottom of the second.

Dunn pitched the first three innings giving up the two runs and Fitzpatrick worked the last four frames holding the potent Lions scoreless. Howard had just lit up one of Howard County’s top pitchers in No. 18 Reservoir’s ace Trevor Romaine on Tuesday, rolling to an 8-1 victory.

“Yeah, you could say we were pitching by committee and it’s working,” said Fitzpatrick. “I’ve pitched in the summer and first base has been my job here (high school) until this season. Our chemistry is amazing because everyone has a role and does it.”

Fitzpatrick’s role against Howard was to hold the one-run lead and he did that with some help from his defense. Howard left a runner on in the fifth and in the sixth had a runner on with one out, but Hebron erased the possibility of a threat with an inning ending 6-4-3 double play turned by Barke.

The Lions mounted a serious threat in the top of the seventh when their first two batters reached. Ryan Kulick’s attempted sac bunt resulted in a Fitzpatrick snare of the ball and subsequent throw to first for a nifty double. With the tying run on second, Culley ordered an intentional walk for Jakubek and a wild pitch moved both runners into scoring position at second and third.

Another intentional pass was issued to load the sacks with two outs and Gabe Delgado came to the plate. Delgado worked the count to 3-2 and with everybody off to the races on the next pitch with two outs, Fitzpatrick coaxed the Howard standout into popping out to third to end it.