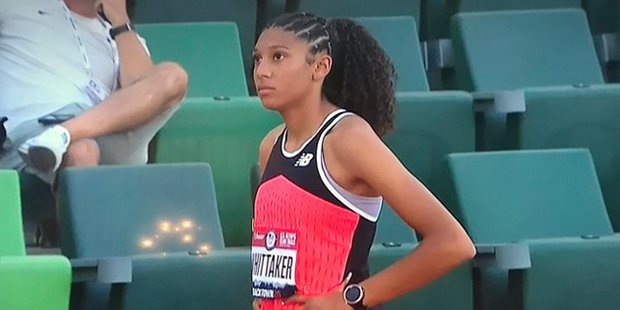 Sailor star runs a personal best 2:01.02 against the nation’s best

Juliette Whittaker, a rising senior at Mount de Sales Academy, competing in the 800 meters, finished third in her heat at the U.S. Olympic Team Trials in Eugene, Oregon, Thursday, and qualified for Friday’s semifinal round.

Whittaker, VSN’s No. 1 Middle Distance Runner of the Decade, ran a personal best time of 2:01.21, in the opening heat, and finished with the evening’s 13th best time in a field of 42.

“I was expecting a slower more tactical race, but it definitely went out a bit faster than I was expecting,” Whittaker said following the race. “I just tried to hang on that last 200 because I was hurting pretty bad. It was great competition so I was happy with it.”

There will be two semifinal heats with the top three in each heat, as well as the next two fastest times, qualifying for Saturday’s finals. Regardless of what happens, Whittaker knows this experience will help her as she builds towards achieving her goal of eventually making the Olympic team.

‘I was really just going for the experience, because I’m so young,” she said. “Hopefully, I will have many more chances to do this again, but I really just wanted to learn.”

Last Friday, Whittaker’s sister Isabella, VSN’s No. 1 Sprinter of the Decade and a Mount de Sales graduate who competes for the University of Pennsylvania, ran in the 400 meter trials, placing sixth in her heat with a time of 52.96. She finished 24th overall in the field of 28.

Pictured above: Mount de Sales’ Juliette Whitaker checks the results after running a personal best 2:01.21 at the U.S. Olympic Trials, Thursday in Eugene, Oregon. She now moves on to Friday’s semifinal round.