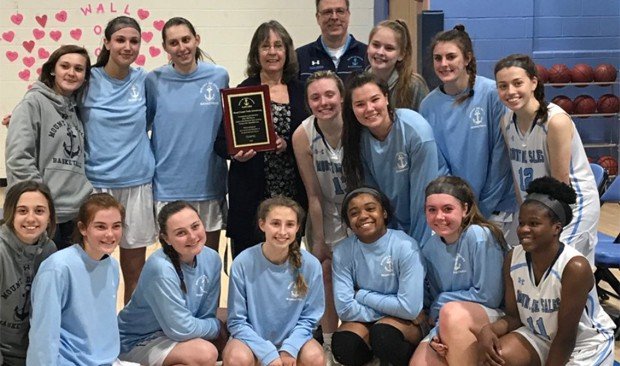 Top-seeded Sailors move into the IAAM B semifinals with a victory over St. Timothy’s; B Conference playoff roundup

Fifth-ranked Mount de Sales, the top seed in the IAAM B Conference basketball playoffs got a tougher than expected challenge from 8th-seeded St. Timothy’s, Wednesday in Catonsville, but the Sailors hung tough for a 42-33 victory and a place in Friday’s semifinal round.

The win was the 22nd of the year for Mount de Sales and the 200th career victory for head coach Trish Armstrong.

Friday’s semifinal will feature Mount de Sales hosting 5th-seeded Glenelg Country School at 5:30 p.m. The winner of that game will play in the IAAM B Conference Championship Game on Sunday at 4:00 PM at Stevenson University.

Glenelg Country advanced to the semifinals with a 46-31 upset of fourth-seeded Annapolis Area Christian. The other semifinal will feature 2nd-seeded Mount Carmel against 3rd-seeded St. Paul’s School for Girls. Mount Carmel got a major scare from 7th-seeded Maryvale Prep before prevailing, 49-47, and St. Paul’s routed 6th-seeded St. Mary’s, 75-46.

Top-seeded Sailors move into the IAAM B semifinals with a victory over St. Timothy’s; B Conference playoff roundup