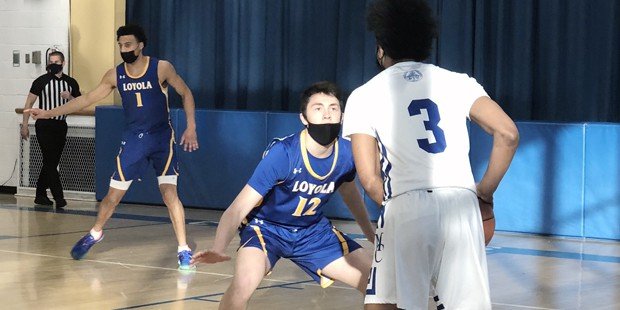 by Gary Adornato Despite breaking away for an impressive one-handed jam that produced his team’s first points of the night, Mount Carmel senior Toby Nnadozie knew his team was stuck in a lower gear for much of its Baltimore Catholic League quarterfinal basketball game against 5th-seeded Loyola Blakefield, Monday evening in Essex. 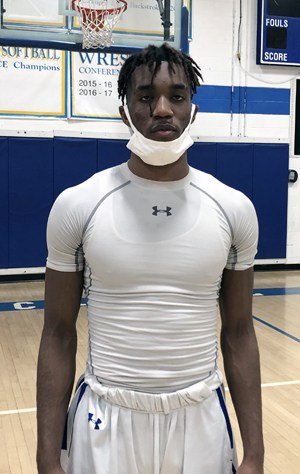 In the fourth quarter, however, the 4th-seeded Cougars, who trailed from the opening tip, finally changed the pace on the deliberate Dons, with a variety of defensive pressures and rallied for a 66-63 win, to earn spot in Wednesday’s semifinals, at Calvert Hall, opposite top-seeded and undefeated St. Frances.

When Mount Carmel (12-3) finally took its first lead of the night, with just 41-seconds remaining in the fourth quarter, it was once again a one-handed break-away jam by Nnadozie which did the honors.

“I felt that was when the game was about to change when I made that dunk,” said Nnadozie, who scored 16 points in the victory. “I knew we would come up offensively and come up with the win.”

For more than three quarters, Loyola (8-6) appeared to be doing everything it needed to pull off a road upset. The Dons landed three first quarter three-pointers and edged out to a 13-12 lead after the first eight minutes. They hit two more treys in an 8-1 run to start the second quarter as they claimed their biggest lead at 21-13 and led 33-29 at the half. In the third quarter, the Dons pushed their lead back to eight on three different occasions, with junior Gavin Walsh sinking a late three to put Loyola up, 49-41, heading into the fourth period.

In the final quarter, Mount Carmel immediately began deploying a combination of pressure defenses, switching between full-court, three-quarter court and half court trapping schemes. The change of pace led to a slew of turnovers for the Dons and, although Mount Carmel did not immediately translate them into made field goals, the Cougars started to get to the line and convert.

Two free throws each from Kevin Kalu and Nnadozie got the Cougars within four early in the final quarter, but the Dons held onto the lead for dear life while Mount Carmel kept chipping away. The Cougars finally drew even on a short jumper by Mitchell Kalu with 1:07 to play. On the next possession, a steal led to Nnadozie’s second trip above the rim and the Cougars never looked back. They hit 14-of-16 free throws in the final quarter, including 5-of-6 after Nnadozie’s dunk, to build a 66-60 lead, before Loyola’s Owen Fischer hit a three in the waning seconds to set the final score.

“They play at a slow pace. We were definitely playing at their type of pace,” explained Nnadozie. “We’re usually a speedy team. We speed up everything, defensively and offensively, and we were not playing like that. In the fourth quarter we knew we had to step up and speed their team up and create turnovers.”

Mount Carmel head coach Trevor Quinn explained how his team changed their fortunes in the second half. “Loyola does a great job of keeping the game at their pace and we kind of let them do that for the first three quarters,” said Quinn. “In the fourth quarter, we had to change the tempo in the game. We pressed a little bit, got some traps, created some turnovers and got them out of a rhythm a little bit. That allowed us to create some offense and get to the free throw line. 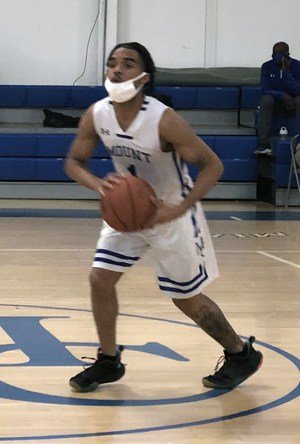 Junior Deon Perry scored a game-high 21 points to help his Cougars advance to the BCL Tournament semifinals where they will face top-seeded St. Frances on Wednesday.

“Getting this win, in the fashion that we did, says a lot about our kids and our team. I am excited about that.”

Mount Carmel junior Deon Perry led all scorers with 19 points and he came up big in the third quarter to keep the Cougars in range. With his team trailing 37-29, Perry followed a layup with back-to-back three pointers and he was 4-for-4 from the free throw line in the fourth quarter.

Kevin Kalu added 13 points for the Cougars and his brother Mitchell netted nine. Senior Cam Smith closed out his Loyola career with a 15 points and junior Gavin Walsh matched that point total to share team-high honors for the Dons. In addition, Uchechukukwu Unegbu, Ryder Drew and Charley Hepting combined for 26 points.

“The margin of error in our league is so small,” said Loyola coach Josh Davali. “A couple of bad passes here and a bad pass there turns into points you just can’t afford to give up. I thought for 30 minutes we played great. We had the game under control and we made a few bad passes, a few careless mistakes, and you can’t do that against good teams. They took advantage of all of them.”

Wednesday’s semifinal with St. Frances will tip at 5:30 p.m and Quinn is confident his squad will be ready to compete.

Wednesday’s other semifinal will feature 6th-seeded John Carroll, which pulled off a 67-65 upset of 3rd-seeded Mount St. Joseph, against 2nd-seeded Archbishop Spalding, which prevailed 61-58 against 7th-seeded St. Maria Goretti. The Patriots and Cavaliers will tangle at 7:30 p.m., also at Calvert Hall. Wednesday’s winners will meet on Friday at Calvert Hall in the championship game of the 50th Baltimore Catholic League Tournament, tipping off at 6:00 p.m.