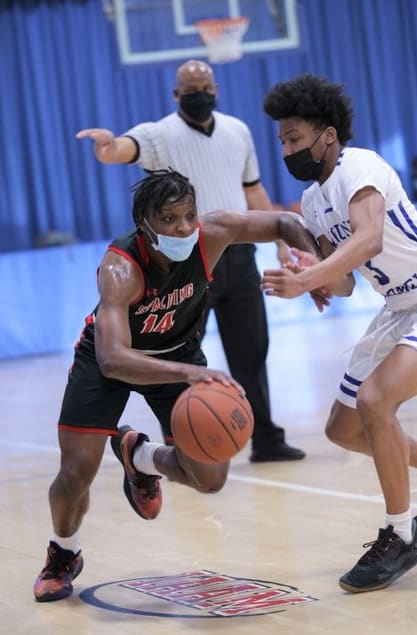 Spalding’s Jordan Pennick (left) drives past Mount Carmel’s Andrew Dixon during the first half of Friday’s Baltimore Catholic League basketball contest. The Cougars survived a second half rally by the Cavaliers for an 80-79 victory in Baltimore County (photo – Jimmy Fields Sr.)

As a freshman, Andrew Dixon has been a key component in Our Lady of Mount Carmel’s success on the basketball court this season. With the Cougars on the brink of an epic collapse Friday, Dixon showed again the moment was not too big.

The guard’s free throw with 3.9 seconds left in regulation was the difference as Mount Carmel defeated Archbishop Spalding, 80-79, in a Baltimore Catholic League contest in Essex.

Junior guard Toby Nnadozie had 21 points for the Cougars, and Deon Perry and senior post Kevin Kalu each added 16. Cam Whitmore finished with a game-high 30 points for Spalding, and C.J. Scott had 18.

Up 24 points in the third quarter, and without two starters in the final minutes, Mount Carmel withstood a furious Cavalier comeback, ending the Severn school’s nine-game winning streak. The Cougars (10-1 overall), who suffered their first loss earlier in the week, sit third in the BCL (4-1) heading into the final week of a shortened regular season.

Mount Carmel has momentum, thanks to Dixon, who finished with 15 points Friday. He converted the front end of a double bonus.

“You have to keep your focus and keep playing,” said Dixon, who saw teammates Nnadozie and Kalu both foul out in the final minutes.

Dixon missed the second free throw, and Whitmore got the rebound and called timeout with 2.4 seconds remaining. Bouknight’s heave from just inside half court missed.

The Cougars, who dominated for three quarters, were able to breathe a sigh of relief.

“The second half momentum…it felt like the game change for whatever reason. They started shooting a lot of free throws and it slowed the game down,” said Mount Carmel coach Trevor Quinn. “We had to execute down the stretch with guys off the bench and they did a good job. In previous years, we would lost our composure.”

Mount Carmel dictated tempo and controlled the boards, building leads of 30-17 after one and 46-34 at intermission. The Cougars led 66-42 with 1:30 left in the third after a Nnadozie’s basket following a Spalding technical foul.

Down 70-51 early in the fourth, the Cavaliers (9-2, 4-2 BCL) mounted a dogged rally, sparked by intense defensive pressure. Spalding went on a 26-7 run, capped by Ty Peterson’s free throws to tie the game at 77 with 51.9 seconds left in regulation.

Perry converted two free throws in the double bonus, regaining the lead for Mount Carmel with 31.3 seconds left. The Cavaliers got the ball to Whitmore, who powered his way up for a basket, tying the game at 79 with 16 seconds remaining.

Dixon drove the baseline and was fouled. The 6-foot-1 Dixon has confidently handled his role for the Cougars.

“One thing he always does is keep his composure and defends on every possession,” said Quinn. “That keeps him on the floor.”

Perry, the Cougars’ junior leader, has also been impressed with Dixon’s play. He was pleased to see his mates regroup after blowing a huge lead.

“It’s crucial for us to remain on the same page throughout the game,” said Perry.

Spalding coach Josh Pratt, who got on his team in the huddle after the opening quarter, was proud to see them nearly pull off an improbable comeback.

Andrew Dixon’s free throw with 3.9 seconds left in regulation was the difference for Mount Carmel Friday. The freshman guard finished with 15 points.

“What the players and everybody says is they punched us in the face. I think we needed it,” said Pratt, whose team lost for the first time since the season opener (vs. St. Frances Academy). “To our credit, we came back. We showed a lot of fight and I’m just really proud of the kids, but you got to move on.”