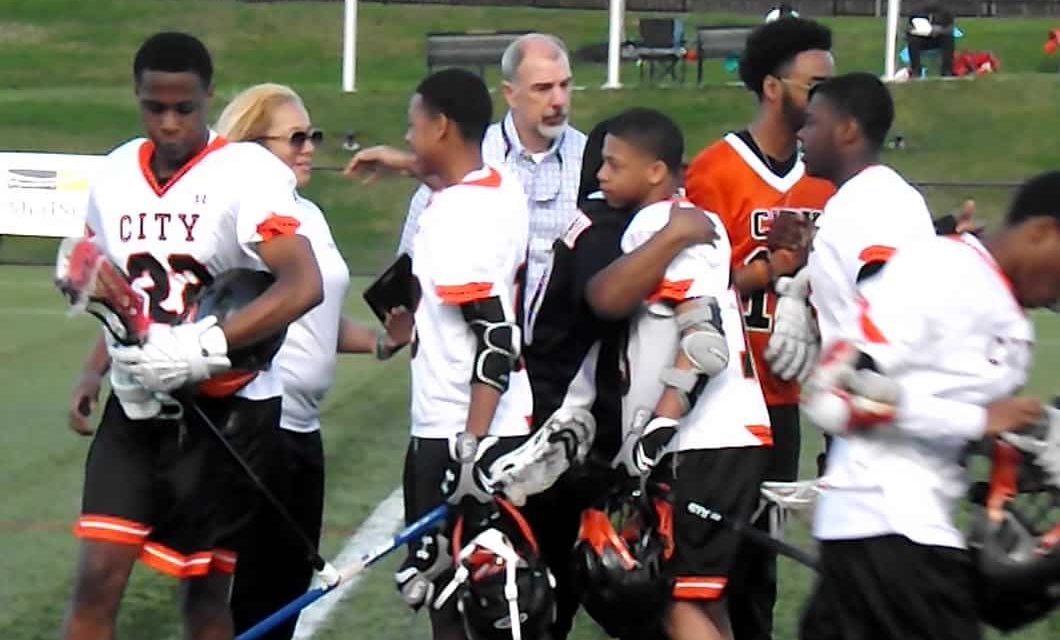 Saturday’s boys lacrosse match between City College and Mervo High at the US Lacrosse Complex had special meaning. The rematch of last year’s Baltimore City Division I title match concluded a “Day of Remembrance,” held in memory of city league players Ray Glasgow III and Devin Cook, whose lives were cut short.

In a pre-game ceremony, Glasgow’s and Cook’s parents received plaques. Bricks with Cook’s and Glasgow’s name will be placed at the US Lacrosse facility in Sparks.

“I got to know him really well because I would pick him up from practice and after games I would take him home,” said Carter, who coached at now-defunct Northwestern and was the Baltimore City lacrosse rep for many years. “He was a great kid…It great to have an event like this to honor Devin and Ray even though their lives were cut short.”

Carter, who started the Hampton program in 2016 after retiring from the city Fire Department, recruited Cooks to be part of the historic first Pirate squad. In summer of 2014, Cooks, a member of CCBC-Catonsville men’s team and a 2012 graduate of National Academy Foundation, was gunned down in northwest Baltimore.

Two days before last spring’s city final, Glasgow, a junior on City’s lacrosse team, was shot and killed in southeast Baltimore in what city police say was a case of mistaken identity.

City coach Anthony “Merc” Ryan put together Saturday’s event with support from Carter, who was Ryan’s teammate at Edmondson High and on Morgan State University’s legendary 1975 team which defeated Washington & Lee, in one of the biggest upsets in college lacrosse history.

The Morgan squad was honored at halftime of the college match between Hampton and Bethany College. Hampton won 26-2 as former City standouts Melvin Scott and Derian Sturdivant-Williams and Archbishop Curley grad Jordan Brown each played well.

The rematch between City and Mervo did not disappoint as Knights prevailed, 9-8, in overtime. Junior Alton Foreman fired in the game-winner, two minutes into the extra frame off a beautiful pass from D’Andre Chaney.

“We played well we just didn’t finish,” Mervo coach Marvin Church said. “This has turned into a rivalry now, we got great shots, but just couldn’t finish things up like we usually do.”

“We just keep on plugging away and the guys did an outstanding job,” Ryan said.

The teams are on track for another city title showdown next month.

But for Ryan, Saturday was about Cooks and Glasgow.

“It was a great win, but it boils down to playing for one another and we wanted to honor both Devin and Ray today, it has been hard since a good amount of the guys on this team knew Ray well,” said Ryan. “He was a great player, but an even better person so it will be hard for a long time.”

Pictured above: City College lacrosse players hug members of Ray Glasgow’s and Devin Cooks’ family during a pregame ceremony Saturday at US Lacrosse in Sparks. Glasgow, a junior at City College, and Cooks, a 2012 National Academy Foundation graduate, were honored after being killed by gunfire in 2018 and 2014, respectively.