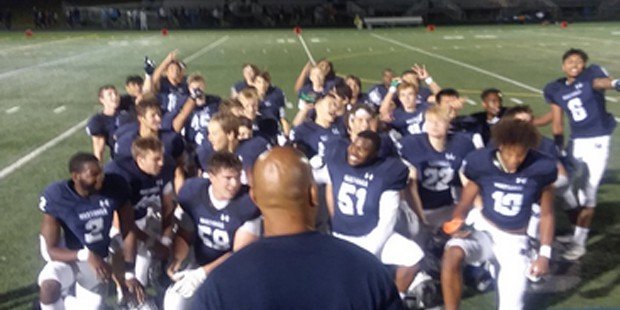 After three impressive wins to start the 2019 football season, No. 12 River Hill appeared to be well on its way to a run at the Howard County title. They may still happen, but if so the Hawks will have to bounce back from their 14-13 overtime loss to Marriotts Ridge, Friday night.

The win was the first in Marriotts Ridge school history over River Hill.

Jaylin Moore intercepted a pair of passes in the game, including one in the end zone on the final play of the first half, scored pair of touchdowns and scored the game-winning two-point conversion in overtime.

Moore’s first score came on a 5-yard pass from quarterback Casey Pung, in the final minute of the game, after teammate Ryan Reeling recovered a critical fumble at the River Hill three-yard line. That score tied the contest at 7-7 and setup the overtime.

River Hill went first in OT and went back in front with a 1-yard TD sneak by quarterback Dylan Burnett, and with Santiago Bryant’s extra-point kick, the Hawks led 14-7. The Mustangs did not panic, responding with a 10-yard TD run by Moore, on their first overtime snap. Marriotts Ridge lined up for potential game-tying extra-point kick, but an encroachment call against the Hawks inched the ball closer to the goal line, prompting head coach Marcus Lewis to go for the two-point conversion.

Once again it was Moore, as he collected another throw from Pung, setting off a wild celebration for the Mustangs.

After squandering good field position on a couple drives in a scoreless first half, River Hill took the game’s first lead on a 61-yard touchdown run by Anthony Behrmann, as the Hawks led 7-0 with a 8 minutes left in the third quarter.