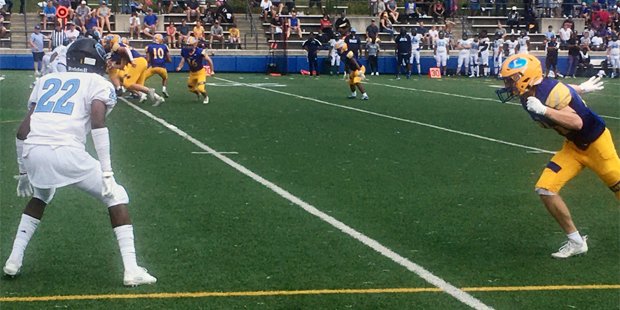 by Nelson Coffin
There was no small amount of controversy when the Loyola Blakefield football program temporarily left the MIAA following back-to-back winless A Conference campaigns in 2016 and 2017 and posted a 9-41 league mark over the previous nine seasons.

Loyola Blakefield sophone quarterback Jayden Moore sparkled in his first start this season under center for the Dons, running for one TD and throwing for two more scores in a 34-6 win over St. Vincent Pallotti on Saturday afternoon at Hargaden Field in Towson.

The idea was to get the program back to the point where the Dons could be competitive again while playing as an independent with MIAA rivals — including archival Calvert Hall College in the Turkey Bowl — sprinkled in their schedule.
This season, Loyola is taking another incremental step in its recovery mission by joining the B Conference for the first time in school history.
And on Saturday, the Dons went even further toward a resurgence when they topped No. 10 — and new A Conference member — St. Vincent Pallotti, 34-6, at Hargaden Field in Towson.
Moreover, Loyola opted to give Jayden Moore the starting nod at quarterback, and the sophomore star was up to the task.
He tossed two touchdown passes, ran for another score and made some big plays on special teams for good measure in the satisfying victory.
“I was a little nervous,” Moore admitted. “It was our first time playing an A (Conference) team. We were all excited. But we came out strong and punched them in the mouth. We proved we can play with those teams.”
After Loyola returned the opening kickoff 37 yards, Moore delivered the first blow when his screen pass to senior running back Micah Robinson went for a 45-yard touchdown.
“That gave us some confidence,” Moore said. “We were pretty locked in after that.”
Senior Conor Becks’ conversion kick made it 7-0 with 9:39 left in the first quarter.
Senior defensive end Anto Saka lived up to his name by sacking Pallotti senior quarterback Kenneth Prince when the Panthers attempted to go for it on fourth down at their own 37-yard line on their first possession.
Pallotti coach Tony Ashley said that he gambled in that situation because injuries have decimated his special teams unit.
“We’ve just been plagued by injuries,” he said. “To win at any level, you have to have good special teams.”
The Dons took only six plays to cash in when Moore cut back on a 6-yard sweep and bullied his way into the end zone to build the lead to 14-0 with 4:04 left in the opening period.
Becks nailed a 29-yard field goal to open the second quarter on a drive that was blunted by a sack by senior defensive lineman Cameron Garner.
The Panthers showed some life by stonewalling the Dons’ next possession and then putting together a 16-play, 88-yard drive ably directed by Prince, who completed four of five passes for 31 yards and ran twice for 20 yards during the sequence — including the final 9 yards for a score with just over a minute remaining until halftime.
Moore blocked the point-after attempt, adding luster to his performance.
Pallotti had another long drive — 12 plays — to open the third quarter and penetrated all the way to the Loyola 11 before Saka registered his third sack and Prince’s fourth-down toss was incomplete.
The Dons responded with another Becks’ field goal after Robinson’s 33-yard scamper, a 14-yard jaunt by junior Marcus Hines and a 23-yard reception by junior Shane Elliott set up the 29-yard kick.
Loyola upped its lead to 27-6 in the fourth quarter when Moore avoided tacklers in the pocket and appeared to take off down the field until he spotted Hines all alone near the goal line to complete the 34-yard play.
An interception and a long return by junior linebacker Andrew Duvall to the Pallotti 3-yard line set up junior running back Kyle Powell’s TD plunge to secure the victory.
Loyola coach Anthony Zehyoue said that he had no qualms about giving Moore the start in such a big spot.
“Jayden is one of the most fearless athletes I’ve ever been around,” he said. “I didn’t have any concerns at all about using him.”
The coach said he was pleased with the way his offensive line — seniors Christian Arthur and Billy Dwan, junior Brody Brunner and sophomores LJ Holland and Trevor Syzmanski — protected Moore and opened holes for the running backs.
“We just have to keep stacking good games,” Zehyoue said. “We put a lot of time and energy into winning games. And winning games is hard to do. Today, beating a team like Pallotti with big linemen and good skill position guys, it was a good win.”
LOYOLA BLAKEFIELD 34. No. 10 ST. VINCENT PALLOTTI 6
St. Vincent Pallotti 0 6 0 0 — 6
Loyola Blakefield 14 3 3 14 — 34
1st Quarter
Loyola-Micah Robinson 45 pass from Jayden Moore (Conor Becks kick)
Loyola-Jayden Moore 6 run (Conor Becks kick)
2nd Quarter
Loyola-Conor Becks 29 field goal
SVP-Kenneth Prince 9 run (kick failed)
3rd Quarter
Loyola-Conor Becks 24 field goal
4th Quarter
Loyola-Marcus Hines 34 pass from Moore (Conor Becks kick)
Loyola-Kyle Powell 2 run (Conor Becks kick)