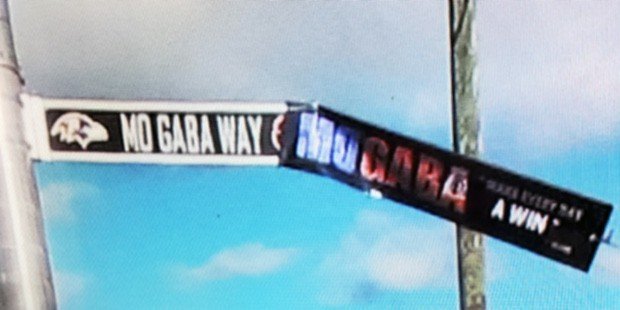 Mo Gaba, the 14-year old super-fan of Baltimore sports, who lost a courageous battle with cancer earlier this year, had a Baltimore City street renamed in his honor, Wednesday morning. 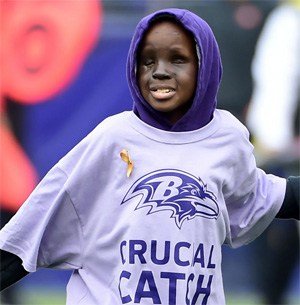 Mo Gaba, the Baltimore super fan who passed away in July, at the age of 14, after a life-long battle with cancer.

A three block stretch of West Street, near Ravens Stadium and Orioles Park at Camden Yards, is now known as Mo Gaba Way. Gaba, who had been stricken with cancer four times during his brief life, came into prominence in 2015 when he began calling into sports talk shows on 105.7 The Fan, and, later, several national shows. His calls were characterize by his unwavering support of the Baltimore Ravens and Baltimore Orioles, as well as his infectious laugh.

The pure joy Gaba expressed, despite the tremendous suffering he endured from his illnesses, endeared him to local media personalities and star athletes from both the Orioles and Ravens. At various times, both organizations honored him.

Gaba, who was blind, became the first person to reveal an NFL draft pick in Braile when he announced the Ravens fifth-round selection in 2019. He also threw out a first pitch at an Orioles’ game.

One of Gaba’s biggest supporters has been Jeremy Conn of 105.7 The Fan, who arranged for Gaba to host his own show, “The Big Mo Show,” one evening shortly before Gaba passed in July. 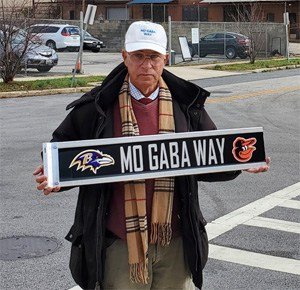 “It was a great honor to work on this for Mo Gaba and his mom,” said DiBlasi. “Everyone in the City and State were very supportive of this effort. I just made some phone calls to the right people.”

“Everybody wanted something to remember Mo,” Conn said. “Joe DiBlasi reached out to me and we had lunch about some things we might be able to get done. I sent in the forms I needed to, and he talked to the right people to get this fast-tracked through the coronavirus. I was happy to do it. Mo meant so much to me, and to so many people.”

Due to concerns surrounding the COVID-19 pandemic, the ceremony was limited to DiBlasi, Conn, Mo’s mother Sonsy Gaba and members of the local media. DiBlasi also arranged for an official proclamation recognizing the day from Maryland Governor Larry Hogan. That proclamation read in part as follows:

“Today truly is a day for giving thanks for the life and courageous spirit of Mo Gaba, an inspiring young hero whose loving family, friends and fellow sports fans greatly admired his tremendous courage, achievements and unwavering positivity during his battle with cancer.”