Team Maryland quarterback Billy Atkins (10) bows his head after a drive stalled during the first half of Monday’s Big 33 Classic. Maryland had several successful drives, but mistakes doomed it in a 20-0 loss to Pennsylvania in Harrisburg, PA.

By many visible measurements, Team Maryland is closing the competitive gap in its Big 33 Classic rivalry with Pennsylvania. For the second consecutive meeting, however, Maryland was held off the scoreboard by its much larger northern neighbor and suffered a 20-0 loss, Monday at Landis Field in Harrisburg, Pa., as the Big 33, one the nation’s premier high school football senior all-star games, returned after a COVID-19 induced hiatus in 2020.

On this Memorial Day, Maryland got a heroic effort from its defense, which slugged it out with a Pennsylvania offense loaded with top tier Division I talent. Maryland allowed one long touchdown pass and a short-field score, after a turnover late in the fourth quarter, but was otherwise brilliant.

With just five practices to prepare, the offense was not nearly as efficient. Maryland managed just 107 total yards and seven first downs, while turning the ball over five times. Including its 9-6 win in 2018 (on three field goals), Maryland has now gone three straight Big 33 games without scoring a touchdown. It lost 21-0 in 2019.

After going three-and-out in its first two offensive series, the Maryland offense gave up the first score of the day, as PA defensive tackle Aeden Holler (Loyalsock/undecided on college) came clean off the left side of the line and stripped Maryland quarterback Billy Atkins (Mount St. Joseph/James Madison University) of the ball, just as he raised his arm to throw. The football took one hop right into the arms of defensive end Bralen Henderson (Pittsburgh Central Catholic/Ohio), who had an unobstructed 14-yard sprint to the end zone, staking Pennsylvania to a 7-0 lead with 3 minutes, 56 seconds to play in the opening quarter.

After the teams exchanged punts, Maryland appeared to create a little momentum early in the second quarter, when Atkins converted a third-and-five with a 30-yard run on a quarterback draw, to set his team up at the PA 28 yard line. Two plays later, however, Maryland put the ball on turf once again and PA’s Balansama Kamara (Central-Philadelphia/Temple) fell on it for the turnover. Four plays later, Judah Tomb (Central York/St. Francis) fought off tight coverage to haul in a long throw from Evan Clark (Manheim Township/Penn State) and turn it into a 64-yard touchdown reception. The extra-point kick was missed, but Pennsylvania had a 13-0 lead.

Maryland started its next possession at its own 42 and put together one of its best drives of the day. DeMatha Catholic’s Sieh Bangura carried the ball four times for 21 yards on the 10-play drive and Atkins connected with Roman Hemby (John Carroll/Maryland) for a 20-yard catch and run, which produced a first down at the Pennsylvania 31. On a fourth-and-one play from the 22, however, Atkins was stuffed for a two-yard loss and the ball went back to PA. The Maryland defense responded by forcing another three-and-out, but the offense got the ball back with just 16.8 seconds left in the second quarter and the score remained 13-0 as the game went to the half.

Maryland limited Pennsylvania to just 85 yards rushing and only 143 through the air.

Both defenses dominated in the third quarter, limiting each offense to just a pair of first downs, but Maryland opened the fourth quarter with a promising drive which once again ended in disaster. Quarterback Brian Plummer (Quince Orchard/Buffalo), who played the entire second half, started the drive with a 10-yard completion to Oklahoma-bound Jalil Farooq (Wise) and then scrambled for a 25-yard run that moved the ball to the PA 35. Another run by Plummer and two rushes from Bangura produced another first down, at the 24, and an illegal participation call against the defense gave Maryland a first-and-five at the Pennsylvania 19. On the next snap, Plummer carried the ball into the middle of the line and had it stripped from his grasp. Preston Zandier (Thomas Jefferson/Youngstown State) made the recovery for PA and Maryland’s hopes of victory started to fade.

The Maryland defense refused to let the game get out of sight, despite being left on the field for most of the second half. PA was able to move from its own 17 to the Maryland 21, but was forced to settle for a 44-yard field goal attempt by Sam Hershey (JP McCaskey/Loch Haven), which was blocked by Calvert Hall College’s Tre Jordan III (Merrimack).

It was one of many big plays made on the afternoon by Jordan, who had several tackles, including two for losses and returned two punts for 16 yards to be named Maryland’s Most Valuable Player in the contest.

Unfortunately for Maryland, Plummer fumbled again on the first play of its next drive, with Luke Miller (Pine-Richland/Kent State) making the recovery for PA at the Maryland 27. Maryland appeared to make another defensive stand when a fourth-and-13 pass was broken up in the end zone, but a late flag resulted in a pass interference call and four more downs for Pennsylvania. A penalty and a sack pushed PA back to the 30 yard line, but quarterback Joe McCraken (Warwick/Maine) was able to deliver a strike to the back of the end zone to Malik Cooper (St. Joseph’s Prep/Temple) for the game’s final touchdown.

Mervo linebacker Xavier Shell (Morgan State), one of the Maryland players who has not played in a football game since the end of the 2019 season, shined as part of the Maryland defense and was thrilled for his Big 33 opportunity.

Maryland had one more possession but it ended in its fifth turnover of the day, as Stephon Hall (Central Valley/Pittsburgh) made a great play on a Plummer throw to take it away from a Maryland receiver and come away with an interception.

“It was a hard fought game, but you have to give them credit for playing good defense,” said Maryland coach Mike Neubeiser of the Pennsylvania defensive effort. “Their coverage was solid throughout the entire game and they got a good pass rush. They’re a good football team and we just couldn’t develop anything offensively.” 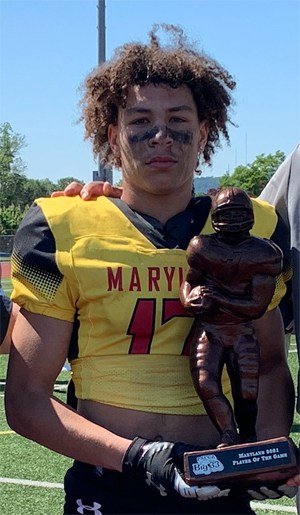 Calvert Hall’s Tre Jordan III led a big effort from Team Maryland’s defense in the 2021 Big 33 Classic and was named his team’s MVP.

Clark completed eight-of-12 passes for 110 yards and a score for Pennsylvania and Isaiah Sturgis (Central York/St. Francis) rushed for 40 yards on seven carries. Bangura led Maryland with 36 rushing yards on nine carries and also caught one pass for 35 yards.

In a normal year, Pennsylvania has many advantages over Maryland in terms of compiling top level high school football talent. For starters it draws from well over 600 schools compared to approximately 220 in Maryland. PA also leans heavily on 64 years of tradition in participating in the Big 33 games, while Maryland has played in just eight contests since returning to the series in 2013.

Heading into this year’s Classic, the advantage was widened due to the fact that Pennsylvania had a full high school football season, while many jurisdictions in Maryland played no football at all, and those that did played an abbreviated schedule.

“It’s tough, we didn’t get a lot of practice going in, with everybody there all the time,” said Neubeiser, who revealed that some of his players played their first and only high school varsity game on Monday. “Some of these kids haven’t played since 2019. I think that probably had something to do with it, but I’m just thankful for the opportunity to be out here with these guys. It’s a great group of kids. It was a very positive experience overall.” 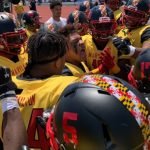