Fifth time the charm? Patterson Mill is back in the Class 1A state girls soccer final after defeating Washington County’s Smithsburg Saturday at Northeast. The Huskies will play Loch Raven for the state title Thursday afternoon at Loyola University’s Ridley Athletic Complex.

After four straight Class 1A state title game losses to Sparrows Point High, Patterson Mill girls soccer didn’t shed a tear when the Pointers were reclassified to Class 2A. Again on the verge of a championship breakthrough, the Huskies will have an interesting obstacle to overcome.

The Huskies advanced to the 1A final with a 1-0 victory over Smithsburg in a state semifinal Friday evening at Northeast. Loch Raven, Perry Hall, Severna Park and Wilde Lake also punched tickets to next week’s state final at Loyola University’s Ridley Athletic Complex with victories Saturday.

The road ended for Century and Rising Sun Saturday in the 2A semifinals at Montgomery County’s Blair. In its first state Final Four match since 2005, the Tigers had a clear attempt go awry as Bella Gusman’s goal in the 52nd minute was all Frederick County’s Middletown needed for a 1-0 decision. 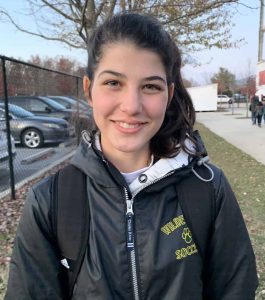 Senior Angie Geralis helped Wilde Lake advanced to the state final for the first time since 2015 with a penalty kick goal Saturday. The Wildecats defeated Chesapeake-Anne Arundel in PKs (4-3) at Linganore, and will play Calvert County’s Northern in the 3A final Thursday or Saturday.

Century’s bid for a perfect season and first title since 2013 ended in heartbreak in a 1-0 overtime loss to Calvert County’s Calvert. Calvert forward London Lewis recovered from the ball hitting her in the face, surging to the goal and finishing in the 84th minute.

Century, the Carroll County Athletic League champs, finish 16-1. It was joy for Perry Hall, which will get to defend its historic first state title of last season, defeating Blair, 1-0, at Gaithersburg in Montgomery County.

Kyleigh Gough’s first half goal was the difference for the Gators, who will play Severna Park for the crown. The Falcons outlasted Montgomery County’s Winston Churchill in penalty kicks, 5-4, as goalie Katie Byrd stopped the final shot in the penalty session.

Maddie Altman, Isabella Espinoza, Chase Campbell, Toni Fiocco-Mizer and Lauren Campbell each converted penalty kicks for the Anne Arundel County squad, which got a goal from Sofia Espinoza in the opening half of regulation. It will be the first state final for the Falcons since 2011 (last won state title in 2003).

Wilde Lake is a win away from its first state championship after going to PKs to eliminate Chesapeake-Anne Arundel in a 3A final four match at Frederick County’s Linganore. Jilliam Ingram, Ashlyn Bonner, Aicha Wilson, Leah Williams and Angie Geralis each converted kicks.

Wildecats goalie Hannah Lowry stopped Chesapeake’s Ella Shannon in the third set of kicks. It was the Cougars’ lone miss in the session as Shannon, a freshman, had the game-tying goal in regulation.

Wilson accounted for Wilde Lake’s goal in regulation. After a heartbreaking 2-1 double overtime loss to eventual state champ River Hill in the 2A South Region semis, the Howard County school has rebounded this fall with a young roster.

“I know a lot of people were looking for us not to be as strong because we graduated three girls who are playing Division I,” said Wildecats coach Megan Shea. “We have a lot of really young talent and also three seniors who’ve started all four years so I think being so strong top to bottom has really helped us.”

“We’ve had so many people step up,” said Geralis, a senior. “I’ve never been this far in the playoffs so this is a new experience. It’s exciting to see everything play out.”

The 1A title match will be an all-area affair again as Patterson Mill used junior Lauren Westbrook’s tally off a throw-in from Maya Pantezlos to fend off Washington County’s Smithsburg Friday evening at Northeast. The Huskies will play Loch Raven, which defeated Southern Maryland’s McDonough, 2-1, Saturday afternoon in Anne Arundel County.

Goals from Haley Gordon and Nicole DeCarlo was all the Raiders needed to reach their first state final since 2010.

“We knew we had a chance if we played hard,” said Loch Raven coach Anthony Mengatti. “We knew playing a tough Baltimore County schedule would prepared us.”

Mengattti was Parker’s assistant for 10 seasons at Loch Raven.

Loch Raven is in the state final for the first time in 10 seasons after defeating Southern Maryland’s McDonough in a 1A semifinal at Northeast Saturday. The Raiders will play Patterson Mill for the state title Thursday.