No. 5 Engineers advance to 3A boys’ basketball Sweet 16 (VIDEO HERE!!) 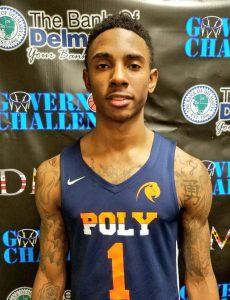 Demetrius Mims had 32 points and seven rebounds as No. 5 Poly routed 18th-ranked City College in the 3A South Region quarterfinals Monday. The Engineers next have a state final rematch with Potomac in Prince George’s County Wednesday evening.

by Derek Toney
Demetrius Mims gladly accepted a complimentary role the last couple of weeks for Poly High boys’ basketball team.
Unfortunately for City College, Mims was back in his leading spot Monday. The Long Beach University recruit poured in 32 points, leading the fifth-ranked Engineers to a 77-43 victory over the No. 18 Knights in a Class 3A South Region Section I semifinal contest in Baltimore City Monday afternoon.
Poly (18-6 overall), the defending 3A state champ will play at Prince George’s County’s Potomac Wednesday night at 7 in 3A Sweet 16 match. The Engineers defeated Potomac in last year’s state title game at the University of Maryland.
Mims, an explosive 6-foot-5 wing, was held under double-digits in two key victories over Dunbar, but was crucial on the defensive end. Monday, he poured in 29 points over the final three quarters.
“He was struggling early, but he definitely finished well,” said Poly coach Sam Brand.
Mims, a four-year starter, was extra motivated playing City for the final time.
“We knew this was our rival coming in. It’s win or go home,” said Mims, who added seven rebounds and two assists.. “Our mindset was locked them up, get out in transition and blow them out. That was the recipe for success.”
Leading 18-11 after one, Poly expanded the lead to 36-23 at half as Mims scored 10. The Engineers led, 59-34, after three. Sophomore point guard Rahim Ali finished with 17 points and seven rebounds for Polt, and Justin Lewis had 17 points and nine rebounds.
Tiyon Gray finished with 14 points for City (15-5), which suffered its worst loss of the season. The Knights, whose coach Daryl Wade was suspended from coaching duties in late October, were arguably the biggest surprise in the city league this season, beating Lake Clifton, defending Class 2A state champ Patterson and city Division I finalist Dunbar.
“We had a nice run, It was exciting especially for my seniors,” said City coach Omar Smith. “They played some basketball I don’t think they knew they had in them.”
The Engineers head south for a state final rematch with Potomac (21-2), ranked No. 13 in the District region by the Washington Post. Poly claimed its first state title with a 64-63 decision over the Wolverines at the Xfinity Center.
Poly won’t have the services of senior guard Cleveland Horton, who was ejected with City guard Mike Bond in the early in the third quarter.
“They play some pretty good basketball in PG County. We played Potomac last year so obviously, there’s a little bit of history,” said Brand. “It’s going to be a challenge. ”
Class 3A South Region basketball playoffs
Section I semifinal
No. 5 Poly 77, No. 18 City College 43
Poly – Mims 32, Lewis 16, Ali 17, Horton 4, Brown 2, Byron 2, Walker 4. Totals 28 ddeddd
City – Gray 14, Bond 7, Ford 2, Thompson 8, Smoot 5, Yates 5, Burden 2. Totals 13 11-14 43.
Poly 18 18 20 21 – 77
City 11 12 11 9 – 43