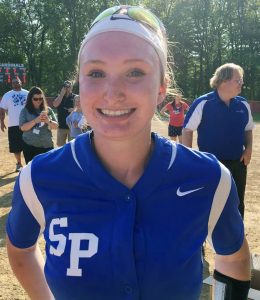 Jessica Miller got stronger with each passing inning as she shutout Lansdowne in the Baltimore County Championship Game. Her fifth inning triple also kick-started the pointers offense in the 3-0 win.

In 30 years as the softball coach at Sparrows Point High, Duke Vickery had never led a Pointers squad into the Baltimore County Championship Game.

In 2018, however, senior pitcher Jessica Miller made it her personal goal to help her coach reach “Counties” for the first time and she delivered, not only helping her squad reach the title game, but leading the Pointers to a 3-0 victory over No. 5 Lansdowne, to secure the title.

Miller worked her way through several jams in the early innings, but allowed just three base runners over the final four innings to complete the shutout. And, at the plate, she led-off the top of the fifth inning with a long triple, which short-hopped the fence in right-center field and her courtesy runner, Nicole Auvil, came in to score the day’s first run on a sac fly off the bat of freshman Sidney Monaldi.

“Our coach said he has not been here in over 30 years and I said my goal is to go to Counties and we actually went, and we won,” said Miller. “It’s a great feeling.”

The sixth-ranked Pointers added their second run in the sixth, without benefit of a base hit, as a couple of infield errors allowed Savannah Hunter to reach base and eventually score. In the seventh, Sparrows Point (16-2) added another insurance run as Megan Hamp led-off with a single, moved to second on an error and scored on a single by Alyssa Shiflett.

Down the stretch it was all Miller, who grew tougher as she tired.

“I actually get tired towards the end, so I actually calm down and my ball tends to fly faster,” explained Miller. “I am always hyped-up at first, but my body calms down as I get tired.”

Lansdowne’s best opportunity to break through came in the top of the third when Tatum Barrass ripped a single back up through the box and Jasmine Schouster reached on an error to put two Vikings on base with no one down. Junior Brianna Eiser was next and she drilled a long fly ball to left that appeared headed for extra bases. Instead, Hunter, Sparrows Point’s left-fielder, turned her back to home plate and raced towards the fence, hauling in the catch and then throwing back in to second to double off Barrass. Barrass left second at the crack of the bat, rounded third and beat a relay throw to the plate and no one seemed aware that she failed to tag up, except Vickery, who called time and appealed. Barrass was called out and Miller then struck out the next batter to end the threat.

“My pitcher came through with a triple and that got everything started for us,” said Vickery. “We were able to capitalize on one misplay and the catcher drove in the third run with a nice hard hit down the line. It was timely hitting and we had some good defense to back up some really good pitching.

“Jessica Miller has done a fabulous job this year as pitcher. She has six pitches and today she had them all working.”

The on-field loss for Lansdowne (13-2) pales in comparison to what the team lost when their head coach Ken Goodman, the father of star pitcher Jordyn Goodman, passed away just prior to the season.

“This has been a difficult season, starting at the beginning with the passing of Jordyn’s father, Ken Goodman, and the girls’ coach and they could have taken it one way or the other,” said Jamie Izdebski, who has taken over the leadership of the team. “It could have been an excuse not to have a good season, or they could go with it and have it as motivation. They took it with the motivation and every game they step on the field they want to win.”

Both teams now advance to the state playoffs and both will have first round byes. Lansdowne will host either Milford Mill or Woodlawn next Monday in a 3A North Region contest and Sparrows Point, playing in the 1A North Region, will meet either Carver A&T or Chesapeake-BC, also on Monday.