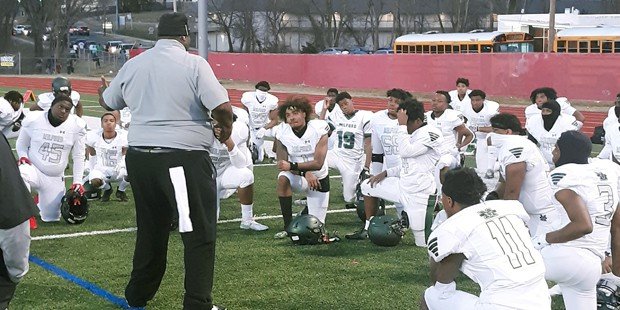 Holmes throws for four touchdowns in Millers’ win at Woodlawn

Holmes, a senior, accounted for all four of his team’s touchdowns on 166 yards passing. Milford Mill’s defense allowed one offensive touchdown.

It has been a year, three months and 20 days since the Millers last played competitively, noted longtime coach Reggie White.

“It’s been a while since we walked up and down these sidelines in a game-type situation and it was tough but we’ll get through it. We made it through,” White said.

From the opening kickoff, the Millers (1-0 overall) were in control. They led 13-0 after the first quarter as Holmes threw a 45-yard touchdown pass to Jamar Gainer and a 35-yard touchdown to Sheldon O’Brien Jr.

Woodlawn relied heavily on the run game, led by quarterback Jaden Gordon. Gordon’s 1-yard score off a quarterback sneak early in the second was the Warriors’ lone offensive touchdown, cutting the deficit to 13-6.

The Millers extended their lead to 19-6 heading into halftime, thanks to a 26-yard toss from Holmes to Mykhai Logan.

Both clubs were riddled with a number of mistakes and errors over the course of the afternoon as the game saw bad snaps, fumbles and penalties while both teams combined for four interceptions.

Nonetheless, coaches and players were grateful for the opportunity to compete in the sport they love despite the circumstances facing the world due to the Covid-19 pandemic.

“It was sloppy. We knew it was gonna be sloppy. We’ll fix those mistakes; we’ll fix the punt team mistakes, we’ll fix the snaps and the speed of the game,” said White. “All that stuff is fixable but the only thing I’m concerned about is the mental errors.”

Following a scoreless third quarter for both teams, the Warriors were still behind by double digits. Two costly plays – both of which were bad snaps by Milford Mill – changed the course of the game.

Both mishandled snaps were recovered by Woodlawn’s Ronnie Harris in the end zone, closing the deficit to 19-18 for a dramatic momentum shift in favor of the Warriors with 5 minutes, 35 seconds remaining in regulation.

Back-to-back tackles-for-loss brought up third down-and-20 for Milford Mill. Holmes showed poise and completed four consecutive passes, culminating the drive with a 5-yard touchdown pass to Isaiah Iroanya with about 3:30 left in regulation,

“That’s just all about trust, you got to trust each and every one of your teammates no matter what position they’re in or what level they’re in, you just gotta trust them,” said Holmes, who practiced as a quarterback, running back and on special teams during the offseason.

Despite the errors, White was proud of the effort, believing his team can build off the win as the abbreviated spring season moves forward.

Similarly, first-year Woodlawn coach Tavon Mason thought his guys could have done better in certain areas and acknowledged the special teams’ ability to convert bad snaps and punts to touchdowns.

Mason, who starred at Woodlawn and the University of Virginia, said it felt good pacing the sidelines for the first time.

“It’s just surreal because a few months ago if you think about it, we weren’t supposed to be playing. Now here we are playing our first game and I felt good about it,” said Mason. “I think the biggest thing for me is seeing our guys fight, especially having a mixed team of freshman, sophomores, juniors and seniors.”

Pictured above: Milford Mill football coach Reggie White addresses his team after a victorious return to the gridiron, Friday, with a 25-18 Baltimore County win at Woodlawn.