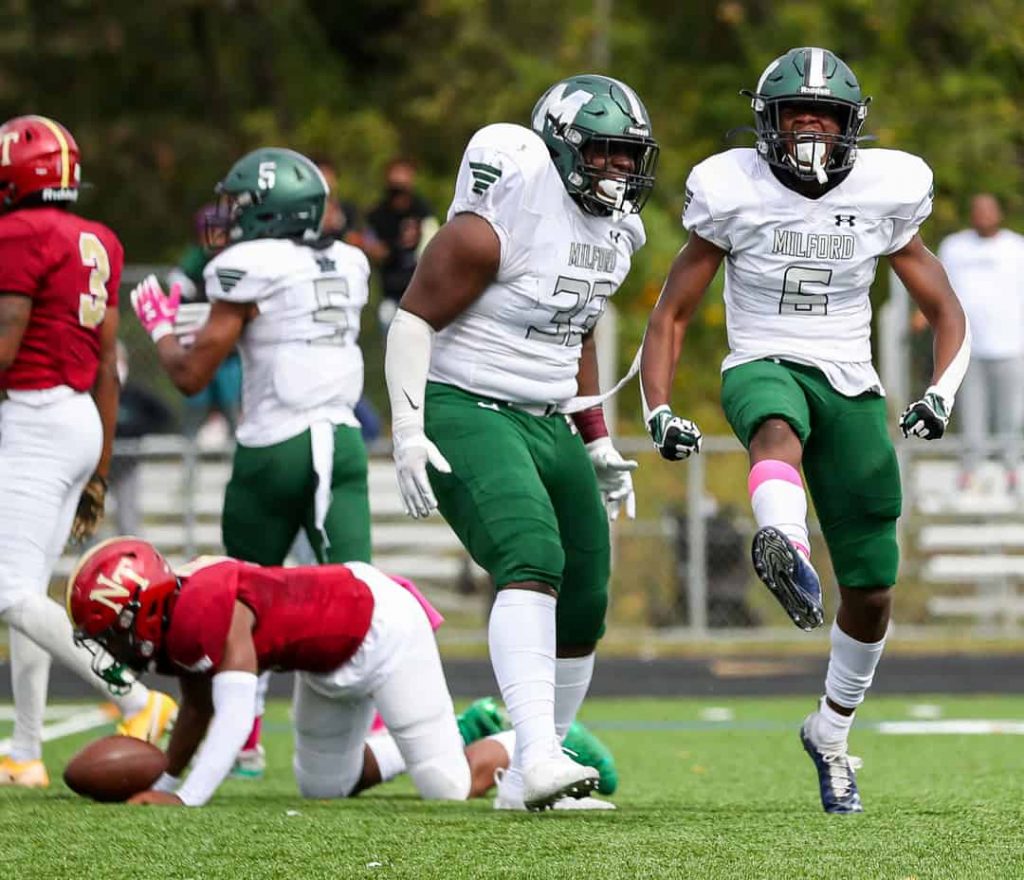 After making a diving interception late in regulation Saturday’s football game against New Town, Milford Mill’s Tasheen Howard came to his feet and turned to the nearby Titan sidelines. He walked a couple of feet with the football raised before going over to celebrate with his teammates on the other side of the field.

In a game that was contentious at times, Howard and the No. 10 Millers got the final word with a 27-13 victory over previously unbeaten New Town in Baltimore County Division II action in Owings Mills.

In winning its fifth straight, Milford Mill (5-1 overall, 5-0 Division II) has the inside track for the division championship. The Millers have winless Randallstown (Oct. 22; home) and at Kenwood (2-3; Oct. 29) remaining in Division II play.

Howard did a pretty good Lamar Jackson impression as well, completing 8 of 15 passes for 207 yards and rushed for 57 yards, including scoring runs of 14 and 1 yards. He ran 19 times Saturday as senior running back Chris Butler injured his ankle on the first series and didn’t return.

“It’s nothing that I’m not used to,” said Howard of his workload.

Milford Mill, which started fast Saturday, was laboring in the second half when Howard came to the rescue. He intercepted a Titan pass in the end zone with 2 minutes left in the third quarter, preserving a 21-13 lead.

Two plays later, Howard dropped a pass into the arms of a wide open Desmond Sampson, who sprinted to the end zone for an 81-yard touchdown play, extending Milford Mill’s advantage to 27-13 with 1:15 left in the third. Sampson finished with five catches for 153 yards.

“It was a slant-and-go and the guy (New Town defender) didn’t go with him,” said Howard, who had a 49-yard touchdown pass to Sampson in the first half.

Howard had 34 yards on the Millers’ opening drive Saturday, finishing it off with the 14-yard touchdown run. On Milford Mill’s next possession, Howard’s pass downfield was tipped by a New Town defensive back into the hands of Sampson who went into the end zone for a 49-yard score.

The Titans (5-1, 4-1 Division II), sparked by a horse collar tackle penalty on Milford Mill on a fake punt run, answered. Jak’Kem Allen threw a 34-yard touchdown pass to Akeem Wright with a minute left in the opening quarter.

Howard capped a 9-play, 57-yard drive, pushing over the goal line and extending Milford Mill’s advantage to 21-7 early in the second. New Town pulled to 21-13 late in the quarter as Allen (8 of 18, 176 yards) connected with Ian Brown from 23 yards.

Milford Mill had the chance to add another score before halftime, but Howard’s pass was intercepted in the end zone by Joleil Walker.

Tasheen Howard (left) had a monster day Saturday with three interceptions and accounted for four touchdowns while Byron McCoy led a Milford Mill defense that kept New Town scoreless in the second half. Milford Mill has won five straight since a season-opening loss to Franklin.

Howard made up for it, in a huge way, in the second half.

“We just kept our heads high, played fast and physical,” said Howard. “The scoreboard will tell you.”