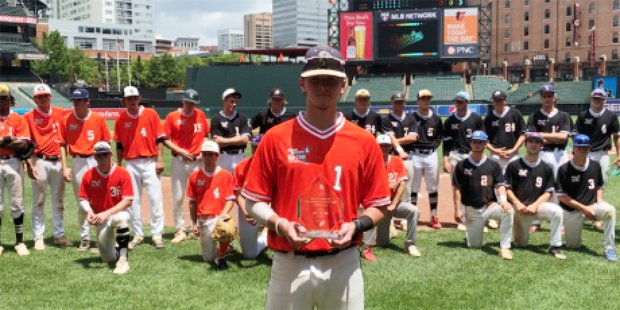 The Brooks Robinson All-Star Game, which was canceled in 2020 due to the COVID-19 pandemic, returned to Oriole Park at Camden Yards, on Sunday, with a host of local high school baseball stars taking part.

Severna Park’s Jackson Merrill, who went on a home run binge during the recently concluded MPSSAA 4A state tournament, showed once again why he may very well be selected in the early rounds of next month’s MLB Draft, when he smacked a two-out, two-run home run in the top of the seventh inning, helping South All-Stars salvage an 8-8 tie with their North counterparts.

The blow made a profit of the game’s namesake, who said he had a feeling someone would “go deep,” during a pre-recorded message to the players on the scoreboard prior to the contest.

Merrill, who hit 12 home runs this spring to tie a school and Anne Arundel County record, led Severna Park to a 17-1 record and a runner-up finish in the 4A state tournament. He was named the South team’s Most Valuable Player on Sunday.

Atholton’s Brandan Brown, who also helped his team to runner-up finish in the 3A state tournament, was the South’s Most Outstanding Pitcher. He pitched scoreless seventh inning, with two strikeouts, to allow Merrill’s home run to stand up for the tie. Earlier in the game, Indian Creek’s Even Selmer tossed two scoreless innings for the North, allowing just two hits and striking out three.

Another big contributor for the South, at the plate, was Archbishop Spalding’s Thomas Joseph, who drilled a 2-run triple to right, with two outs in the third inning, to give the South a 5-4 lead at the time

For the North, John Carroll’s Cody Kurek walked twice and scored a pair of runs, while Gilman’s Casey Bishop earned the North’s Most Valuable Player honor for a two-out, 3-run double in the sixth inning. Bishop’s big blow turned a one-run North deficit, at the time, into an 8-6 lead.

Pictured above: Severna Park’s Jackson Merrill, with players from both teams, accepts his award as the South’s Most Valuable Player.

Here is the complete list of Baltimore area stars who were named to the 39th edition of this classic.