Mercy dooms Park with a 12-0 first half spurt 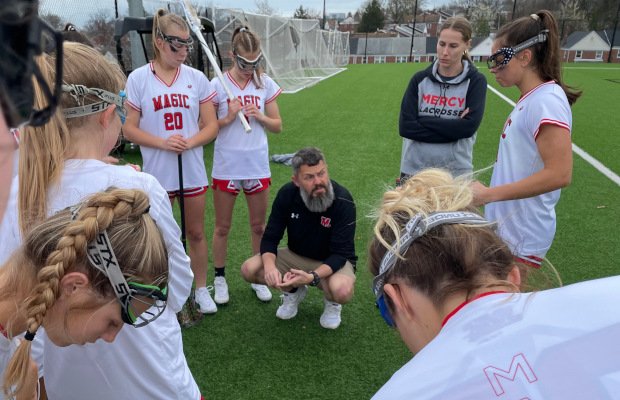 Colander, Safchock and Wojcik each score four times for the Magic and two others finish with hat-tricks

Last year, Mercy’s girls lacrosse team beat Park handily twice during the regular season only to lose to the Bruins in the IAAM B Conference championship, so, “We were waiting for Park,” said Mercy’s Jamie Collender. 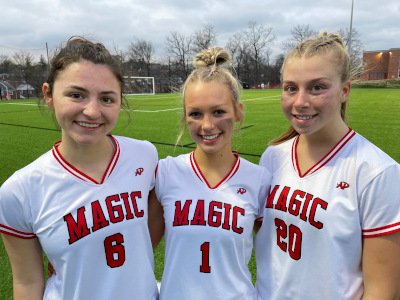 Wednesday night, the Magic got their revenge in a big way, beating No. 20 Park, 21-7, with a running clock for the final 34 minutes of the game. The victory leaves the Magic (6-4, 3-0 conference) as the only team undefeated in B Conference play.

The Bruins (5-1, 3-1) stuck with the Magic through the early minutes, but Mercy’s dominance on the draw and a spurt of extra-man goals helped them run away from Park through the middle of the first half.

The Magic won three straight draws and scored three times within 23 seconds on extra-man opportunities to take a 4-1 lead with 16:54 left in the half. They would go on to score 12 straight goals on 13 shots.

“Once we go on a run, it’s kind of hard to stop,” said Mercy attacker Jamie Collender. “Park put up a really good fight but once we’re on a run our team gets really into it and we start connecting passes, getting goals, getting draws. We just worked really well together once we were on that run.”

Bruins coach Robin Cardin Lowe, who was missing a few players on a field trip, said the early extra-man goals were the turning point.

“I think we gave them the confidence they needed when we went man-down… We gave up three goals during that time and just deflated ourselves,” Lowe said, “and with the kids we were missing, I wasn’t sure we could stay with them and defensively we were. We were playing really, really strong. We were nervous. We turned the ball over way too many times early in the game where we didn’t take advantage of our opportunities.”

The Magic’s 12-0 run took less than 13 minutes and when Bella Wojcik scored off one of Sydney Casserly’s four assists, they led 13-1 with about 4:45 left in the half.

Mina Gollogly got one back for the Bruins, but Collender made it 14-2 with 1:54 left and, after Magic goalie Lila Stachowski saved Park’s next shot, Casserly finished off a transition goal with 12 seconds to go on a feed from Calleigh Hayes.

In the second half, the Bruins matched the Magic goal-for-goal until the final two minutes, but with a running clock, time flew by too quickly for them to make up any ground.

The Magic also continued their domination on the draw as Mills, a sophomore who already has over 100 draw controls for her career, won 11 to help the Magic to a 19-11 advantage. She holds the school single game record of 15.

“Me and Jamie (Collender) both take draws,” said Mills, “and when we work together it goes really well. I think today went pretty well because they didn’t know what was coming. We had a new game plan this year and we just thought up some different ways at practice and it was successful today.” 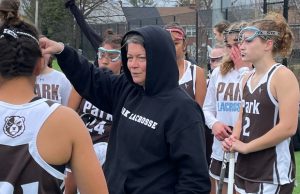 Park coach Robin Cardin Lowe gives her team a few last-minute tips before the first draw against Mercy Wednesday night. The No. 20 Bruins, whose 2021 IAAM B Conference championship ended a string of three Magic titles, fell to Mercy 21-7.

Another change this season has been a tougher schedule that coach Brian Casserly hopes will sharpen the Magic so they not only go undefeated in conference play as they did last season but also win the title. The Magic has played four A Conference teams, defeating Gerstell and falling to Roland Park, Mount de Sales and John Carroll.

“Last year our kids didn’t see a ton of adversity,” Casserly said. “Our kids kind of rolled through conference play and even our out-of-conference games, they were scrimmages and we play every body, so we made a point this year to load the front end of the schedule with really good public schools teams, A Conference teams and Georgetown Visitation from D.C. to challenge our kids, to put them in situations that were uncomfortable and where they would fail, so they would understand how to react to that.”

The Bruins, who won last year’s title 11-10 in overtime, know they’re capable of bouncing back as they did last season.

“I think we can definitely learn from this,” said Gollogly, a senior who scored three goals and had an assist as did teammate Cassandra Kitchen.

“We’re a much different team than we were last year. We lost a lot of our starters and we just need to watch film of this game, learn what they do on attack, figure out how to defend them and especially work on draw controls, I think, but this is definitely a growing experience and a game to learn from.”

The rematch is just three weeks away, on April 21 at Park.