The No. 3 Mercy soccer team scored all three of its goals in the first half to jump on host and 11th ranked Loch Raven early and kept the defensive pressure up to claim a 3-0 victory on Tuesday afternoon.

The Magic improved to 4-0 overall and collected its second shutout of the young season.

Mercy has a total of 23 players on the roster and first-year head coach Doug Pryor is trying to take advantage by using fresh legs when needed.

“Loch Raven is a very scrappy, hard-nosed team so our objective today was to find out where players can play and move them over,” said Pryor.  “I’m very, very happy with the outcome.  I think today having twenty-some players in the heat really helped.”

He added: “My goal is to have all of them, from 1 to 23 contribute throughout the year.  On days when it’s hot like this it’s big having all these players.”

Mercy kept two players on the Raiders’ top scorer and All-County performer junior midfielder Kara Kleinhammer, making it hard for her to find any daylight to make a move. 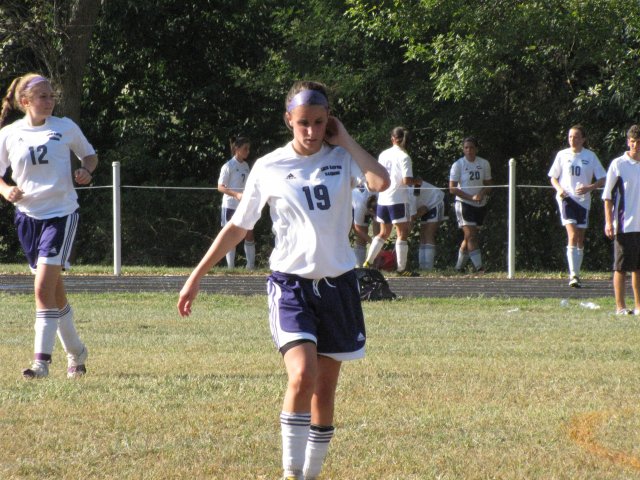 “I think the reason we did so well today defensively is because we had a sweeper and a stopper so they couldn’t get any free balls,” said defensive captain Sara Dorrence.  “We had really strong center-mids as well as our outside backs. I believe they only got one cross off all game.”

Coach Pryor credited Magic sophomore stopper Aubrey Wetzelberger in helping mark Kleinhammer.  In a game against Bryn Mawr last week, Wetzelberger helped bottle up one of the top players in the IAAM in the Mawtians’ Riley Berger.

Nieodoba started the scoring off for Mercy just minutes into the game after drilling a free kick into the top left corner of the goal.  Nieodoba got tangled up with a defender and was tripped.  She made Loch Raven pay with the score.

“For me [the opening goal] was great because it was a confidence booster and it really got us going,” said Nieodoba.  “We just kept going hard from then on.”

“In any game when you get a goal right away like that, it builds the confidence in teams,” said Pryor.  “We don’t matter how it goes, as long as it goes in is all that counts because now we‘re going down hill and the other team is going up hill.”

Later in the half, Niedoba played the ball into Schmidt, who knocked it in after the ball that tipped off of the goalies.  Clarke capped the scoring with a run to the goal and finish after getting a nice pass from freshman Anna Borkowski.

Loch Raven, the defending Class 1A champions, knows that it is a long season and playing a tough team in Mercy early will only help down the stretch.

Mercy will host Severn on Friday in the last non-league game before the IAAM A Conference season gets under way.  The Raiders will look to rebound when they compete in the Catonsville Tournament this weekend.
To view highlights, click on the Related Videos link at the top.