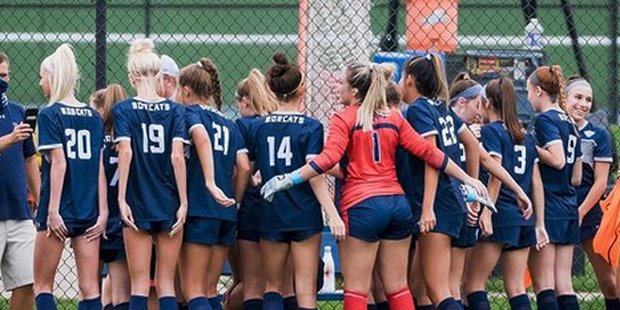 Bobcats defeat No. 7 Perry Hall and No. 12 John Carroll in the process

It was a banner day for the Bel Air girls soccer team, on Saturday, as the Bobcats hosted and won their own invitational, knocking off two Top 20 teams in the process.

Bel Air goalkeeper Emily McGrain made 34 saves in two games, including four PKs, as the Bobcats knocked off two ranked opponents and won their own invitational.

In the 8 a.m. tourney opener, Bel Air faced No. 7 Perry Hall and the two teams played to a 1-1 draw through regulation and a pair of overtimes before Bel Air won with a 4-3 advantage on penalty kicks.
Kamryn Williams scored for Perry Hall, in the first half, and Kaylee Derita netted Bel Air’s goal, in the second half, with an assist from Maria Cimino.
Both goalies were spectacular. Bel Air’s Emily McGrain made 15 stops, including two PKs in the shootout. Serenity Jankowiak saved 14 shots for Perry Hall, including one PK.
In the championship match, Bel Air picked up a very decisive 3-0 victory over No. 12 John Carroll, scoring all three goals in the second half.
Payton Todd broke the ice for the Bobcats and Ali Reynolds added the second on a PK, after Giana Dawson drew a foul. Sarah Griffins add the third to seal the deal. McGrain was even more spectacular in this one, saving 19 shots, including two PKs after Bel Air fouls. Kaylee Derita added an assist for Bel Air.
John Carroll reached the final with a 1-0 win over C. Milton Wright. CMW defeated Perry Hall, 1-0, in the consolation game.