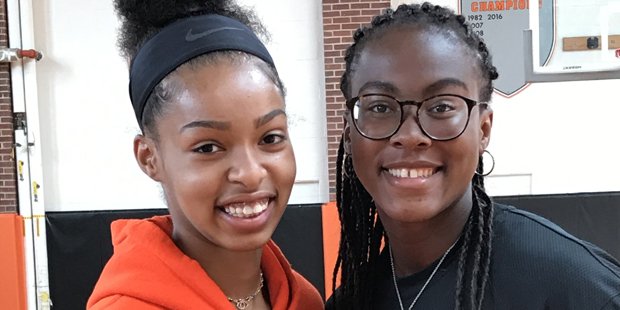 Only rising sophomores, this pair of 15-year olds are already making their mark nationally

Tatum Greene and Kennedy Umeh just finished their freshman year at McDonogh, but their basketball skills have already landed them on the national radar.

Greene, 15, and Umeh, who turned 15 last Saturday, are among 34 girls invited to try out for the USA Basketball U16 National Team June 13-16 in Indianapolis. Twelve girls will be chosen for the team which will compete in the FIBA Americas U16 Championship in Santiago, Chile in August.

Greene, a 6-foot-3 guard, said she was shocked to receive the invitation.

“I was in my room relaxing and I checked my email and I was like, ‘Wow,’ especially since we’re the younger players. To be chosen to try out for the team is just a blessing,” she said.

“It was the last thing I expected,” Umeh said. “My parents had gotten the email, but they didn’t really know what it was and weren’t really sure it was real, but Tatum’s mom called my parents to talk about it and it was just really shocking, because there are a lot of good players in this area.”

While Umeh is fairly new to basketball, having started to play in third grade, Greene started playing recreation basketball at five. She shares her love for the sport with her mother, Chanel Wright Greene, a 1995 Parade All-American and two-time state champion at Western who went on to play at North Carolina and professionally in Israel and in the WNBA.

In their McDonogh debut, Greene and Umeh helped the Eagles finish 8-0 in an abbreviated season during February and March. Although they had to pull out a 60-58 win to beat St. Frances, they won their eight games by an average margin of 38 points.

Greene and Umeh were certainly welcome additions to a team that already had quite a few top-level players in senior Jayla Oden, juniors Nekhu Mitchell and Delaney Yarborough and sophomores Makeala Quimby, Paris Locke and Anaiah Jenkins, setting the Eagles up for a promising future.

McDonogh coach Brad Rees said Greene and Umeh complement each other perfectly on the court.

Greene, ranked No. 24 nationally in ESPN’s initial 2024 HoopGurlz Terrific 25, stands out for her versatility, Rees said. She played every position except post for the Eagles.

Kennedy is a physical post presence whose tenacity is unmatched, he said. For a 6-4 player, she’s very athletic and runs the floor well.

“Tatum is more of a finesse player, very skilled whereas Kennedy is just very physical,” Rees said. “She seeks out the physicality and she’s certainly more comfortable in the paint whereas Tatum’s more comfortable around the 3-point line. Them playing AAU together really helps how they complement each other. They’re so used to each other, they know what they’re going to do, they know where they’re going to be.”

Greene and Umeh, who now play for the Philadelphia Rise, enjoyed great success for two years together with the Maryland Belles. Last year, both were instrumental in their team winning the championship at the U.S. Junior Nationals Hershey National Showcase. In the title game, Greene had 20 points, including the game-winning layup, and Umeh finished with 15 points and 11 rebounds.

Both girls have aspirations of winning a college national championship and then playing professionally in the WNBA or overseas.

They’re excited about the college offers they’re beginning to receive. Greene’s first offer came from Wake Forest in the eighth grade before others started rolling in from such programs as Rutgers, Michigan State and Clemson. Umeh received her first offer from Boston College last week.

But their anticipation of the national team tryouts brings a whole new level of excitement.

They will compete hard to make the team, but they believe their time in Indianapolis will be well spent even if they don’t make it. Most of the girls trying out are a year older than the Eagles’ pair and seven of them already have national team experience.

“I’m looking forward to learning as much as I can from the coaches who are going to be there,” Umeh said. “I know that they have a lot of experience sending girls to the WNBA and to higher levels of basketball overseas. I’m really excited to play against really good girls in my age group to see how I compare to them and what I need to work on to get better.”

Greene said, “Even if I don’t make the team, it’s a good opportunity to gain more knowledge and to improve my game. Then going back next year, I’d have a better understanding of how to make the team, because that’s the ultimate goal — to make the team and play for the USA. Just being more experienced and learning how to be a better player will help with that goal.”

Only 13 girls in the class of 2024 nationwide will try out for the team, putting Greene and Umeh in elite company at a young age.

”In terms of exposure and notoriety, I think it really is going to mean a lot for them individually,” Rees said, “because that’s something they can put on their resumes now. They’ll be on that list that all these college coaches see. Additionally, just the experience of playing against the best players in your age group and above, just that experience to compete at that level, to go through the stress of a tryout like that for a national team will mean so much for them in terms of long-term development, not only skills-wise and on the court but also maturity-wise.”

Players who make the team will stay in Indianapolis to train for three extra days after selections. The final 12 players will also attend a training camp from Aug. 4 until they leave for Chile.

Rees believes Greene and Omeh have a chance to be there.

“They both have some skills and capabilities that they could make it,” he said. “They could contribute to a team like that, I think.”