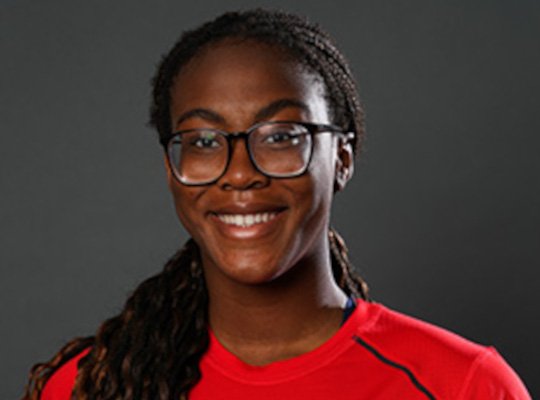 After being cut from the U16 squad last year, Eagle star made the most of a second chance

As soon as the invitation to try out for the USA Basketball Women’s U17 National Team hit her inbox, McDonogh’s Kennedy Umeh realized how badly she wanted to make the team.

Umeh, a 6-foot-4 post, was among the last players cut at the U16 national team tryout last year. She hadn’t spent too much time thinking about another chance until the email arrived.

“I was kind of surprised that I was invited back, because a lot of people that were there last year weren’t really invited back,” said Umeh, who helped No. 1 McDonogh win the IAAM A Conference championship this past winter as a sophomore.

“The thought of making the team had always been in the back of my mind since I didn’t make it last year, but when the invitation came I was like, ‘Coach Brad (Rees), Coach Talen (Watson), I have to make the team this year,’ so I worked out a lot more than I did last year.”

She had three months to focus on her game between the invitation’s arrival and the start of tryouts on May 26 at the U.S. Olympic & Paralympic Training Center in Colorado Springs. Her hard work paid off.

Umeh was one of 12 girls selected earlier this month for the US team that will play for the FIBA U17 World Cup in Debrecen, Hungary July 9-17.

“I”m really looking forward to the match-ups,” Umeh said. “Playing makes me happy, so to be there and play the other best bigs from other countries that I would never have had the chance to play otherwise is really exciting, but at the same time, I’m nervous. A lot of people [will be] watching that.”

Umeh has already received a lot of attention from college coaches. Although she was at the tryouts and couldn’t talk to coaches on June 1, the first day they were allowed to call her directly, McDonogh coach Brad Rees said more than 50 coaches tried to reach her. She’s also a stellar student who wants to be a doctor and Rees said with that combination of her game and her grades, she can play college basketball anywhere she wants.

Athletic and strong, she’s a tenacious post presence who is versatile and can run the floor.

“Her pure physicality is something that I think really translates well in international play and at the next level which is kind of what this is,” said Rees.

The other thing that sets her apart is her work ethic.

“This is something she worked really hard to accomplish after just missing it last year. She was one of the last two players cut, so this year, she knew what she needed to do and she really worked hard for it which is something I was really proud of her for. She put her mind to it and got there,” said Rees.

Umeh, who plays AAU basketball for Talen Watson on the Philadelphia Rise, said she approached this year’s tryouts a bit differently than least year’s.

“I think between this year and last year, I kind of figured it out a little bit,” Umeh said.

“I learned mentality, Not every day is going to be your best day and not every session is going to be your best session. I don’t know if the [correct] word is different, but just show something that makes you stand out. I don’t want to say that how you do doesn’t matter, but I should try and beat everybody that’s there. I realized that the trials are position-by-position for a reason, so I shouldn’t be trying to be a good 3 or 2, I should focus on being one of the best bigs, be a good 5 or play like a good 4.”

Umeh,16, said that over the previous year, her game has grown but so has her confidence.

“The biggest difference between this year and last year is maybe my confidence in myself to be able to actually do the things I practice [in games]. Last year when I went to trials I had been practicing shooting, new post moves all the time, ways to get around people, but I never did them at tryouts. I never did them at my team practice. I never did them in AAU games, high school games, but I feel like that’s changing. I’m getting a little bit more confident.”

Later this week, Umeh, who is the youngest player on the team, will join her U17 teammates in Colorado Springs for a week for a week of training. Then, they will move on to Spain for tune-up games against Spain, France and Australia before heading to Hungary.

Umeh wanted to thank every coach she’s ever played for, especially Rees, Watson, Rise assistants Ben Watson and Tony Lee and program director Kevin Lynch, as well as her parents.

But she will have plenty of time to thank her parents, because, to her immense joy, her entire family is heading to Hungary to watch her play in her first international tournament.

“I just have to thank them for getting me to where I am, because I could not do this without them,” she said.