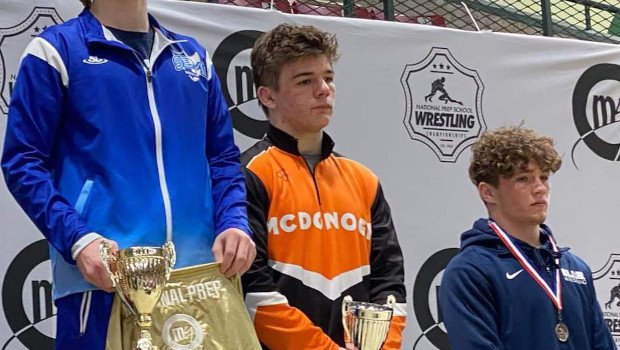 The prospects of any local teams competing for the team title at the National Prep Tournament were basically non-existent. Afterall, the country’s top three teams were in the field plus a powerful, Lake Highland Prep from Florida (4th with 165.5 points).

At the end of action on Saturday at the Show Place Arena in Upper Marlboro, Maryland – Pennsylvania’s Wyoming Seminary sat atop the standings with 346.5 points. Another PA squad, Malvern Prep was in second with 304.5 points. New Jersey’s Blair Academy finished in third place with 294.5 points. It was the first time since 1979 that Blair was not in the top two.

The focus over the weekend for the local contingency was individual glory. No one epitomized that as much as McDonogh’s Richard Fedalen (No. 1 in the latest rankings by the MSAW). The senior finally stayed healthy enough to finish a season, grabbing his first MIAA and state titles this year.

Fedalen came up just short of adding the crown jewel to his trophy case, falling in the 152lb finals to the Beast of The East champ, Joe Sealey (Wyoming Seminary), 15-5.

The Eagles’ (11th with 70.5 points) next highest finisher was No. 1 Billy DeKraker, who was 4th at 120lbs. In the consolation semis, the state champion defeated St. Joe’s Coleman Nogle for the third straight weekend, this time, 4-2. It was DeKraker’s second time reaching the prep awards stand (he was 7th at last year’s NP Open).

No. 5 Enzo Bell had a disappointing day 2 of the MIS Tournament last weekend. Holding a late lead in his semifinal match with No. 2 Joel Brown (Landon), things fell apart and the Eagle was pinned with five seconds left. In the consolation finals, he was upset again, this time by Bullis’ Tallion Elliott (No. 4).

In Friday’s round of 16, Bell squared off with Brown and picked up a 7-4 win. The junior would go on to place sixth. No. 3 Gerard Johnson was sixth at 195.

Mount St. Joseph’s five place-winners paced the Maryland teams and landed them inside the top ten (9th with 85 points). No. 1 Carter Nogle was fifth at 113. Coleman Nogle was sixth at 120. For both, it was their second time earning Prep All-American status.

In the consolation quarterfinals, the Gael kept the upset train rolling, taking out the seventh seed, Gabe Moore (Liberty Christian School, TX), in overtime, 4-2. The Cinderella run came to an end in his second encounter with Edwards, as the Texan pinned him 48 seconds into the second period (1:48), in the fifth-place match.

Archbishop Spalding put three grapplers on the podium to pace their 12th place showing (69 points). Leading the way was No. 2 Joe Fisk (152), who became a four-time National Prep placer, landing in the 8th spot here.

No. 1 Brady Pruett, fresh off his second straight state crown, was given the sixth seed here. In the quarters, the Cavalier upset third-seeded Casen Roark (Baylor School, TN), 3-1. Pruett would fall in his next two matches, but ended in the fifth-place position, good for his third All-American journey.

Freshman Sean Garretson (106) put himself in position to become a multiple time placer, working his way to a fourth place showing at this year’s edition of the tournament. Garretson was seeded sixth and picked off the three seed, Brady Kaupp (Green Farms Academy, CT), 6-0, in the quarters. The state champ ran back his state finals match with Bullis’ Ellis Kirsch (No. 4) in the consolation semis, winning 11-3 this time. Unfortunately, Garretson dropped his bronze medal match by tech-fall to Jacob Bond (Baylor School, TN), 16-1.

Loyola was right on Spalding’s heels, finishing 13th with 67.5 points and two placers. Both of their placers overcame adversity to do so. No. 5 Judah Aybar (138) was forced to miss the MIS Tournament due to a concussion suffered in a car accident. The Dons’ considerable talent earned him a Wildcard entry, and he was given the 10th seed. The sophomore battled through the bracket and in his seventh-place match took out the No. 3 seed, SP O’Donnell (Malvern Prep, PA), 5-4.

Teammate Matty Walsh (No. 3 at 145) was also seeded 10th and placed seventh. In the early consolation rounds, Walsh got by Severn’s No. 2 Ryan Money, 5-0. Money defeated Walsh in the MIAA finals. In the showdown for seventh, Walsh added another upset to his ledger, pinning 6th seeded Kailen Richards (Belmont Hill, MA) in the second period, 1:42.

St. Mary’s-Ryken put four grapplers on the podium. No. 2 Evan Boblits was fourth at 113. In the quarter final round, Boblits got by Carter Nogle, in the Ultimate Tie-breaker period. Nogle beat Boblits in the state finals last week and earlier in the season at the East Coast Catholic Classic in VA.

No. 1 Clayton Gabrielson bounced back from his state tournament disappointment with a fourth place showing here to claim his second All-America status. The junior beat Loyola’s Aybar, 8-3, in the round of 16, then pinned the three seed, O’Donnell, in the consolation quarters.

No. 1 Mekhi Neal was sixth at 145. Heavyweight Terrance McCauley (No. 3) placed eighth. The senior avenged his state finals loss to Spalding’s No. 2 Bryce Purnell in the consolation bracket, posting a second period pin, 2:37.

Landon’s No. 2 Joel Brown was third at 132. The junior edged Blair’s Ibrahim Ahmed, 2-1, in the 132lb bronze bout. Brown lost to McDonogh’s Bell early in the tournament, but exacted revenge on the Eagle, 5-3, in the consolation semis. In the consolation quarters, Brown blanked St. Joe’s Wright, 5-0.

Shapiro, who won a Cadet World Championship last summer, pocketed his first prep title after being a runner-up as a freshman while competing for Bullis. Shapiro used four quick pins to reach the finals where he rolled to a 14-4 major decision of Blair’s William Henckel.

Stewart capped a dominating senior season that saw him win Ironman and Beast of the East titles, with his first National Prep crown. His finals match-up with Malvern Preps’ Caden Rogers was one of the most anticipated finals matches in recent years.

Rogers was given the No. 1 seed based on being a returning National Prep champ. The two Titans battled to a 1-1 tie in regulation, then exchanged escapes in overtime for a 2-2 score, Stewart won the Ultimate Tie-breaker period for the glory at 220. Stewart is a Maryland resident who competed for St. John’s College in D.C. before transferring to Blair prior to his sophomore year.

Stewart’s teammate, Paul Ognissanti, rolled straight to Blair as a freshman after toiling away in the Maryland junior leagues. The sophomore was third at 145 last year. His fifth place finish at 138 this year makes him two-for-two in earning the All-American designation. Among Ognissanti’s wins this weekend was a 6-1 one over Gabrielson in the quarter finals.

Pictured above: McDonogh’s Richard Fedalen stands on the medal podium after placing second at the National Preps Tournament.