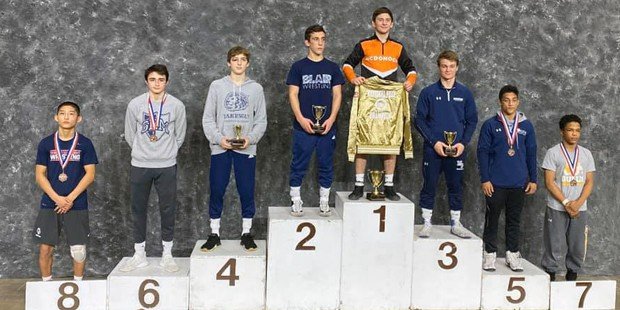 From the time I watched Cooper Flynn’s semifinal win over Blair Academy’s Ryan Miller at the Ironman in December, it was obvious he was a different wrestler this year. Gone was the hesitant wrestler that would at times, let others dictate the pace. In its place was a confident, more powerful competitor that pushed the action.

As freshmen, Flynn and Miller were 1-1. Last season, Miller won both their encounters. This year though, Flynn (No. 5 in FloWrestling’s Rankings) has turned the tables, adding a second victory over Miller (No. 6 by Flo) to his junior season’s story, this one, 3-2, for the 120lb National Prep Championship. Flynn was second as a freshman and third a year ago.

Flynn’s showing helped power his Eagles to a fourth-place finish at the prestigious event held over the weekend at Lehigh University in Pennsylvania. Both Harrison Trahan (160, No. 1 in MD by BillyB’s Wrestling World) and No .2 Garrett Kappes (285, No. 18 by Flo nationally) reached the finals but couldn’t fulfill their title hopes.

Trahan, a two-time prep placer, fell to Wyoming Seminary’s Gabe Arnold (No. 9 by Flo), 3-1, in the finals. To reach that bout, he showed last week’s state final win over No. 2 Connor Strong (Mt. St. Joe) was no fluke, downing his rival 8-5 in the semis.

Kappes’ third trip to the prep podium was also marred by a 3-1 loss to a Wyoming Seminary grappler ranked ninth in the country, Cole Deery. No. 1 Dominic Solis (No. 18 in Flo’s ratings) improved on last year’s fifth place showing, landing in the third spot by pinning Malvern Prep’s Andrew Connolly, 1:40.

No. 1 Jack Wimmer (195) missed the tournament last year but returned this year and the senior stepped on the prep podium for the third time placing fourth at this year’s edition. No. 1 Clayton Gabrielson bounced back from his disappointing loss to St. Joe’s Nathan Porter (No. 2) in the state finals to end his freshman run on a high note placing seventh at 132.

John Carroll’s Julianne Moccia was dominant in winning a national prep title in the girls’ division.

John Carroll’s Julianne Moccia made history last weekend at the Maryland Independent Schools State Tournament by becoming the first female from Maryland to qualify for the National Preps. The 2020 tournament featured a girl’s division for the first time, so Moccia decided to test her skills with her peers.

The Patriot stormed through the bracket with none of her foes able to survive longer than 36 seconds. In the finals, Moccia decked Virginia Ford (Wyoming Seminary) in 19 seconds. Her semifinal bout with Kate Biakowski (Sidwell Friends) resulted in a 36-second pin, and her opening victim, Makayla Carrafiello (Landmark School), went down in 26 seconds. Teammate CJ Polesovsky (No. 8) placed eight at 170lbs in the men’s bracket.

Mount St. Joseph, which is tied with McDonogh for the state’s top spot, was hoping the momentum from the state tournament title would carry over to outpace the Eagles once more. Despite their seven place-winners to McDonogh’s six, the Gaels were fifth with 147 points, 11 behind the Eagle’s 158.

Leading the charge were third place finishers No. 2 Chris Barnabae (126), No. 2 Connor Strong (160), and No. 3 Parker Warner (195). Barnabae concludes his stellar career as a four-time National Prep All-American, the only Maryland wrestler to accomplish the feat this year. Strong improved on a sixth place showing as a sophomore and fifth last year.

Improvement was Warner’s mission this season, and he took that directive down to his last match. The senior, who was eighth here last year, was 0-3 versus McDonogh’s Wimmer this year. The first two were 5-2 and 6-1 wins, but in the state finals, Warner took Wimmer into overtime before falling, 3-1. The prep consolation final would be where Warner’s perseverance paid off, as he finally beat his rival, 6-1.

Archbishop Spalding was eighth with 79 points and four All-Americans. No. 2 Joe Fisk ruined Woods’ quest to end the year as Maryland’s top ranked 138lber. The two split matches ahead of the state tournament where Woods relegated Fisk to another runner-up finish.

Woods planted Fisk in the first period of Friday night’s quarterfinals in 57 seconds. The sophomore shook off those last two results to claim the bronze with a 6-3 victory. The Cavalier won both of their meetings last year.

Joining Fisk as two-time prep placers were, No. 1 Brady Pruett (6th at 113) and No. 4 Dustin Radford (5th at 195). Pruett has two more years ahead, while it’s the end of the line for Radford. Also taking his final bow was No. 2 Nick Paolucci who finally broke through and brought some hardware home with a seventh place posting.

Loyola’s No. 7 James Conway continued his late season surge. Following his third-place display at the MIAA tournament, the junior rallied to capture the 170lb state crown. The Don walked onto the prep mats as the tenth seed, he concluded the action sitting in the No. 4 spot. Conway got his party started with a round of 16 upset of seventh seeded Mark Schadt (Avon Old Farms). The No. 4 seed, Benedictine’s Ryan Tremain, fell to his hand 7-0 in the consolation semifinals.

Conway’s fighting spirit rubbed off on his unseeded colleague, Jeremiah Aybar (No. 12 in MD). The sophomore dropped his first match and had to make the long journey through the consolation bracket. Aybar did that and found himself facing the ninth seed, Poly Prep’s Josh Khoshayev, in the blood-round. The Don used a fall to advance where he dropped to the eighth spot at 182. Khoshayev beat Bullis’ Austin Brown (No. 3 in MD), 9-2, in the round of 16.

Gilman’s No. 2 Mattheus Carroll followed his state runner-up performance by placing seventh here at 220lbs to round out the metro area teams.

Two grapplers who plied their trade at St. Paul’s the last two-seasons, No. 3 NaSir Wilkinson (120) and No. 1 Gene Quodala (145), were amongst Bullis’ five All-Americans. Wilkinson was seventh this year and fourth last year. For Quodala, who was fourth, this was his first time earning a prep award.

Also making their maiden voyage to the prep podium for the Bulldogs were No. 1 Meyer Shapiro (126, 2nd), No. 3 Damon McGee (5th at 138), and No. 11 Isaac Ruderman (152, 8th). Shapiro, who pinned St. Joe’s Barnabae in the state finals, reached the finals, but his freshman campaign ended on a down note as the nation’s top rated 126lber, Wyoming Seminary’s Nic Bouzakis, posted a 10-5 win.

Georgetown Prep’s Kyonte Hamilton (No. 3 in the nation by Flo) won his first prep title with a 13-6 decision of Wyoming Seminary’s Kolby Franklin (No. 10 in Flo’s rankings). The junior was fourth here last year after not placing as a freshman.

St. Mary’s-Ryken’s Mason Buckler (No. 9 in MD) was eighth at 106 and Good Counsel’s heavyweight No.9 Brandon Roberts finished sixth.

Luke Kowalski from St. John’s in Washington D.C. joined the four-time placer club after landing in the fifth spot at 113. Freshman Brady Colbert was fifth at 182 for St. John’s.

Blair Academy and Wyoming Seminary typically have quite the battle for team supremacy at this event, but this year’s race was dampened by the loss of numerous top guns from Blair’s lineup. Seminary walked away with the crown by 81 points (349.5-268.5) and with it, the No. 1 designation in the nation.

***All rankings are by BillyB’s Wrestling World unless otherwise notated

Pictured above: McDonogh’s Cooper Flynn enjoys his moment at the top of the podium as a national prep champion.