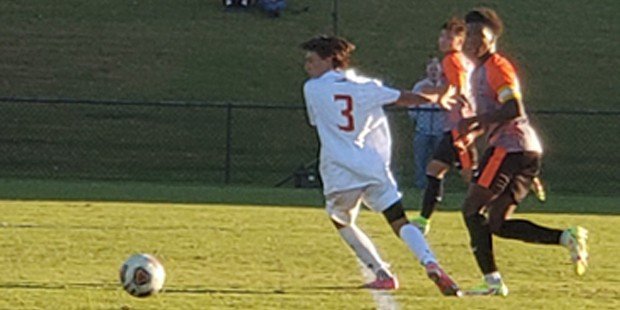 No. 2 Eagles hand No. 1 Calvert Hall its first loss in overtime

No. 2 McDonogh got a Golden Goal from Kobe Keomany, with 2:39 to go in the first overtime, to give the host Eagles a thrilling 2-1 MIAA A Conference win over previously undefeated Calvert Hall, on a beautiful sun-splashed Friday afternoon in Owings Mills.

Sophomore Kobe Keomany’s first career goal was Golden Goal, lifting No. 2 McDonogh to a 2-1 overtime win over No. 1 Calvert Hall.

The victory avenges McDonogh’s 1-0 loss to the Cardinals in the opening game of the season.

The winning goal is one the Koemany, a sophomore, will likely never forget, in that it was the first in his varsity career.

“It’s all about hard work,” said Keomany. “This is what we practice for. You’ve always got to keep going. Calvert Hall is such a great team. I got the ball from Blake (Lloyd) at midfield, I went through three guys, and I just kept going to the goal and put it in the bottom left.”

McDonogh coach Brandon Quaranta expects it tome the first of many big plays for Keomany.

“Kobe is a special player, and I have high expectations for him,” said Quaranta. “To get that ball, drive, and be direct, and then show good composure to finish it, is what it took.

“This was a great game and an important game, with two really good teams, which I think, are two of the best teams in the country.”

The Hall scored first, just three minutes into the game when Ben Madore found Tyler Flynn from 16 yards out. The Eagles tied it, seven minutes into the second half, when Jacob Murrell headed Seth Malek’s corner kick to Trevor Grodsky, whose skillful scissor kick found the twine.

Hall coach Rich Zinkand said that he told his team after the game that it was a learning experience.

“We know that we can play better, but give McDonogh credit, they played hard, and physical, and took advantage of opportunities,” said Zinkand. “That’s what this game came down to, finishing opportunities.

“The first half went back-and-forth, and I thought in the last 10 minutes of the first half, we created some chances. A second goal would have been really big at that point.”

Calvert Hall (10-1-1 overall and in MIAA A) is still four points ahead of McDonogh (11-2, 9-2) in the MIAA A Conference standings. The Cardinals will travel to Meadowood Regional Park on Monday to face Loyola, which earned a draw at Calvert Hall earlier this year.

The Eagles will travel to East Baltimore to face Archbishop Curley, also on Monday.