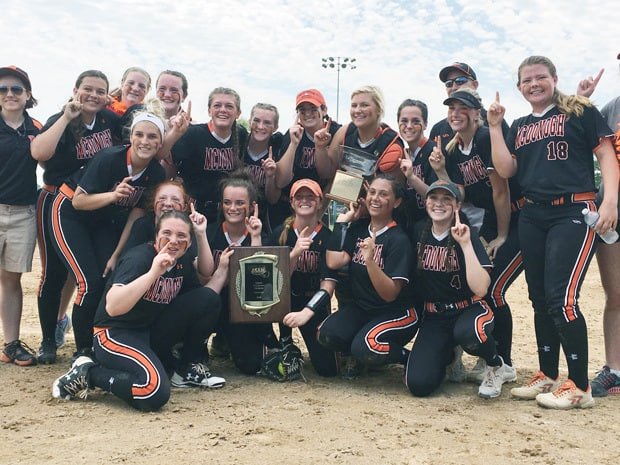 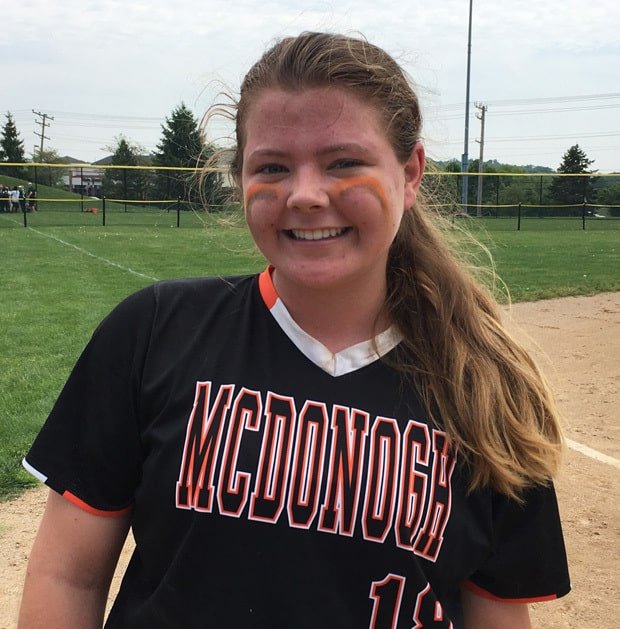 Having beaten unranked McDonogh School twice during the Interscholastic Athletic Association of Maryland A Conference softball season, there was still no certainty that No. 14 Archbishop Spalding would be able to sweep the upstart Eagles in the championship game on Saturday afternoon at Harford Community College.

There was, however, a feeling that the Cavaliers (10-5) would be able to cross the plate at least a couple of times, considering that three runs were the least amount of runs they managed against A Conference opponents this spring — and they scored 10 or more runs five times against conference foes.

With that in mind, the performance by McDonogh starter Kearstyn Chapman in the circle against Spalding seems all the more impressive.

Featuring a wicked change-up and a nice riser, Chapman was almost all the second-seeded Eagles (11-5) needed to turn back the top seeds, 1-0, in the title game.

Of course, McDonogh also had to have at least one run to claim its first title in 17 years, and catcher Madison Gemmill provided it with a clutch two-out single in the third inning to drive in freshman Emma Lach, who had also singled and advanced to second on a infield out.

Chapman took over from there, working out of a minor jam in the bottom half of the third after two-out singles by junior outfielder Jordan Johnson and junior utility player Jewels Odenhahl put runners on first and second for the Cavaliers.

However, the sophomore right-hander escaped when junior infielder Caroline Wasko was retired on a grounder to second.

After that, Chapman retired 12 of the final 13 batters to complete the four-hit shutout.

Considering that the lacrosse team’s monumental 198-game winning streak had been snapped the night before by Notre Dame Prep, Chapman said that the Eagles were eager to make amends in any way they could.

“We have a lot of lacrosse support,” she said. “So it was just in our heads to bring some kind of title back to McDonogh — and we did.”

While McDonogh coach John Folfas said that he deliberately did not mention the lacrosse loss before the game, he knew that his team was aware of the setback.

“It was a bit of a downer,” he said. “But the teams try to support each other.”

The way Chapman’s pitch repertoire was working — she recorded five strikeouts and induced three popups over the final five innings — during the contest, the Cavaliers almost seemed to be at her mercy.

“Kearstyn kept us on our toes and stayed higher in the zone,” Spalding coach Nicki Trumpler said. “We missed some timely hits, which we have relied on all season.”

Chapman was also aided by a fine defensive play in center field by junior Lacey Allee-Press, who covered a lot of ground to snare a liner off the bat of sophomore first baseman Makenzie Maenner that, instead of falling for extra bases, was turned into an 8-4-3 double play.

“Our fielding was excellent today,” Folfas said about his team playing error-free softball. “We have a lot of talent and we put in a lot of hard work over the winter, so I’m not surprised we were able to pull this off.”

She allowed only six hits in the setback.

“It was what every championship game should be,” trampler said. “Unfortunately we didn’t come out on top. Kudos to McDonogh for their play today.”

Trumpler said that Moore had confidence and poise on the mound.

“She got ahead of a lot of batters and allowed her defense to play behind her,” Trumpler added. “We had a great season and these ladies never gave up. We really worked hard to get ourselves back to the championship. We will work hard and hope to be back stronger next year.”