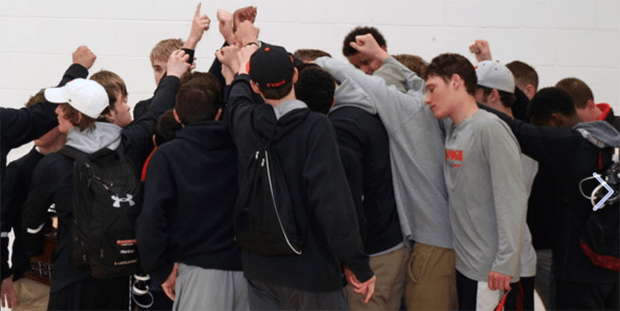 You can never be sure if the outcome may have been different had third-ranked Archbishop Spalding not forfeited four weight classes, compared to just one by No. 2 McDonogh in their MIAA A Conference wrestling showdown, Thursday night, but just one victory in those spots would have made all the difference in the world for the Cavaliers, as they dropped a 39-35 decision to the Eagles in Owings Mills.

Those forfeits came at 220 (the second match of the evening), 285, 132 and 170. Following the final one, at 170, which was the second to last bout of the evening, Spalding still held a 35-33 advantage over the Eagles. That was finally erased, however, in the final match of the night, when McDonogh’s Jackson Bonitz pinned Spalding’s Matt Parker, in 1:53 at 182, to vault the Eagles to victory.

The match began at 195 where McDonogh’s Jack Wimmer claimed a 7-2 win over Dustin Radford. That was followed by the first two forfeits, giving the Eagles a quick 15-0 lead. John Gibbs (106) then got Spalding on the board with an 18-1 technical fall (5:41), before Cooper Flynn put McDonogh back in the win column with a second period pin of Brady Pruett. At that point, McDonogh led 21-5.

From there, Spalding went on a roll.

Andrew Wagner (120) and Gabe Foster (126) recorded back-to-back falls for the Cavaliers, followed by the Cavs only forfeit victory, pushing Spalding in front, 23-21. The run continued with decisions by Rick Couch (138) and Harrison Trahan (145) and another pin by Garrett Fisk (152), pushing the Cavs lead to 35-21.

Unfortunately for Spalding, it would not score again. Harrison Trahan put McDonogh back on the board, at 160, with an injury time default over Tyler Savage, setting the stage for the final forfeit points and Bonitz’s clinching pin.